A dawn to dusk, 12 hour shut down of business establishments, was called in solidarity for the lives lost of CRPF jawans in Pulwama 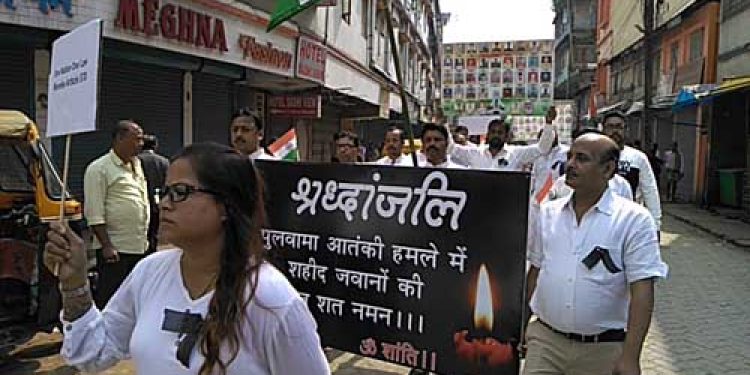 Close to 50 different associations of trade and commerce in Barak Valley, brought the business establishments of its biggest township, and second largest in Assam; Silchar, to a complete standstill on Monday.

A dawn to dusk, 12 hour shut down of business establishments, was called in solidarity for the lives lost of CRPF jawans in Pulwama, three days back.

A silent protest rally was also taken out wearing black badges by shop owners and businessman, beginning from Fatak Bazaar and culminating outside Deputy Commissioner’s Office this afternoon.

Former Dy Speaker and MLA from Silchar, Dilip Kumar Paul, who too has his business establishments, also took part in this silent protest rally, while, MP from Silchar, and All India Mahila Congress President, Sushmita Dev, later joined this motley crew of protestors, outside Deputy Commissioner’s Office.

Traversing on foot, the whole prime town centre areas of Silchar, by more than a thousand people, a memorandum to the Prime Minister of India, to take stern actions, was also submitted through Deputy Commissioner, Cachar.

However, in this silent protest, which witnessed a complete shutdown of shops and bazaars, even a ‘paan’ shop did not open the whole of Monday. While fish market of fatak bazaar wore a deserted look, medicine shops were kept out of this silent protest and solidarity. “Our country comes first, than keeping our shop open and keeps doing our business. We have submitted a memorandum to the Prime Minister of India through our DC to say that we have full faith and support him to take sterner action against such nefarious elements,” said Amit Dutta, President, Barak Valley Food Grains Merchant Association.

Vehicles were not barred from plying, and board exams too were not hampered by these protestors. “We want a tit for tat reply against Pakistan and won’t sit silently anymore,” said, former Deputy Speaker and MLA from Silchar, Dilip Kumar Paul.

Speaking to Northeast Now, MP from Silchar and All India Mahila Congress President, Sushmita Dev, said, “The complete shutdown of business establishments in Silchar was necessary. It has unified us. We are with the government and support them for whatever steps they wish to take against such acts. We won’t allow the sacrifices made by our soldiers go in vain.”