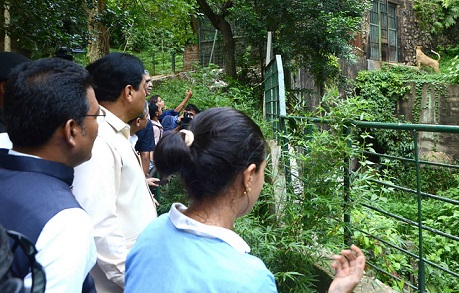 In order to take stock of the ground situation in the Assam State Zoo-cum-Botanical Garden, which is afflicted with the deadly canine virus causing deaths of several canine animals, Assam Chief Minister Sarbananda Sonowal on Tuesday visited the zoo and held discussion with the veterinarians, zoologists, senior officers and zoo authorities.

On being informed about the possibility of canine virus as the root-cause for the spread of a disease known as ‘Canine Distemper’, Chief Minister Sonowal directed the zoo authority to vaccinate all the animals of the State Zoo as a preventive step to bail the zoo out of the problem.

Though in course of the discussion, it was informed that periodic vaccinations are being given to the inmates of the State Zoo, Sonowal directed the zoo authorities to strictly adhere to the regime of all essential vaccines to empower the animals to develop shield against fatal diseases.

Chief Minister Sonowal also took stock of all the species of animals in the zoo and emphasized on the steps taken by the zoo authority for their reproduction.

He also asked to adhere to the specified standard for drinking water and water for bathing. Sonowal informed that appropriate steps would be taken to set up a laboratory in the zoo premises to analyse the qualitative standard of water in Assam State Zoo.

Sonowal also asked the zoo authority for starting an academic centre for the students in the premises of State Zoo which will cater to the zoological and botanical aspects of the academic requirements of the students.

Sonowal also informed that his government is considering to set up a research centre to study the behavioural aspects of the animals and accordingly chart out their food habits, suitable habitats suitable mating period etc. He also said that for transforming the Assam State Zoo into a centre of excellence for the tourists, State Government will take adequate steps.