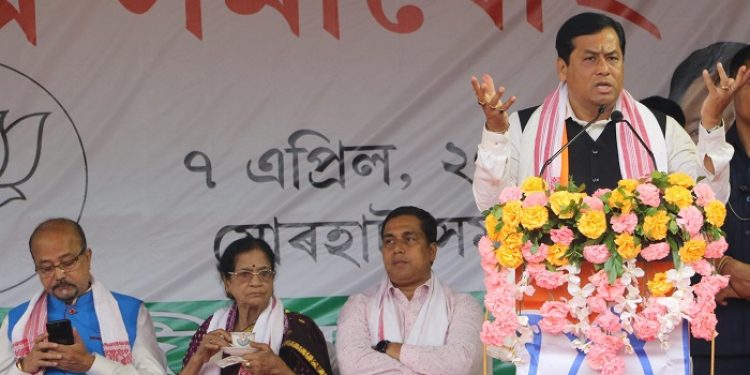 Assam chief minister Sarbananda Sonowal on Sunday played to the galleries by frequently attempting to speak in the tongue of the tea garden community at an election rally held a Kalyani Ranga Manch at Cinnamara in Jorhat.

The Cinnamara area has a high percentage of people belonging to the tea garden community.

Due to inclement weather, the rally was delayed by two hours and the venue shifted from the Kalyani High School playground to the Rangamancha.

The chief minister while harping on the various schemes given by ‘Narendra’, to the farmers, poor, women and students,  painted a rosy picture of making Assam as great as it was when Siu-Ka-Pha had established the foundation of the Ahom Kingdom in the Northeast in 13th century if the BJP was returned to power at the Centre.

Sonowal later addressed a citizens’ meet at the Jorhat district library to take stock of how much the people had gained after the BJP came to power and what their expectations were from the Centre and State.

In the election rally Sonowal said that Siu-Ka-Pha had wrought a kingdom which had witnessed peace, prosperity, culture and development for 600 years.

Exhorting the electorate to vote for the BJP, he said that similar development would be witnessed only if Narendra Modi became the Prime Minister again otherwise they would get nothing if the Congress came to power as was evident in, 55 years of that party’s rule in the country.

Sonowal said that apart from the large number of schemes which was meant to better the lives of the people, the Centre had given the people security.

He raked up the Chinese aggression of 1962 and Nehru’s incursion and compared it to the Kashmir terror attack recently and the reaction and counter attack by the defence forces under the Modi government.

He further said that he would ensure a corruption free governance so that funds meant for infrastructure development did not find its way into the pockets of a few as had happened during 55 years of Congress rule.

Sonowal praised the BJP Lok Sabha candidate Tapan Gogoi who was the state power minister and MLA of Thowra in Sivasagar district, saying that Gogoi had given a lot of power to the people free of cost.