500-bedded medical college and hospital to be constructed with a financial outlay of Rs. 398.31 crore 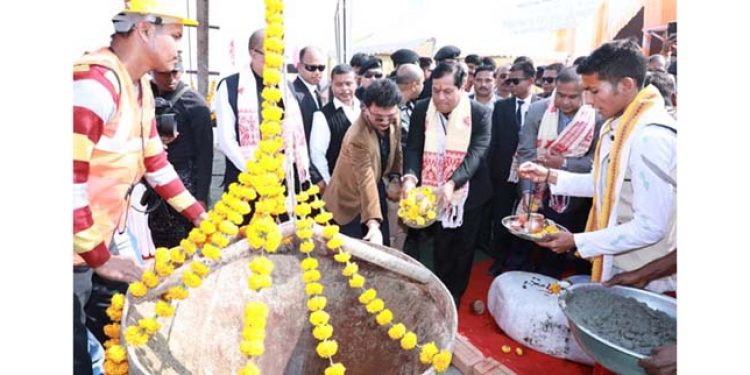 In order to boost the healthcare delivery services in the north bank districts of the state, Assam chief minister Sarbananda Sonowal on Sunday launched construction works of Nalbari Medical College & Hospital at Borigaon in Nalbari district.

The 500-bedded medical college and hospital, to be constructed with a financial outlay of Rs. 398.31 crore, will provide academic opportunities for 100 students per year.

Speaking on the occasion, chief minister Sonowal underlined the priorities of the state and central governments in unleashing a new era of development in every part of the country.

He said laying of foundation stone of the medical college and hospital at Nalbari is a testimony of their commitment.

Sonowal also came down heavily against the previous Congress governments alleging that in the last seven decades, the Congress-led governments had “neglected” development of the state and “failed to tap the inherent potential”.

He said the BJP-led state and central governments have been working to expand academic infrastructure in the field of medical science, engineering etc. and a result of this construction of Medical Colleges at Nalbari, Kokrajhar, Lakhimpur, Dhuburi have begun apart from AIIMS at Amingaon.

Stating that the state government through its announcement of State Capital Region and industrial corridor from Amingaon to Tihu has taken pragmatic steps for giving a new impetus to development in and around Nalbari, Sonowal pointed out that the Act East Policy enunciated by Prime Minister Narendra Modi and other infrastructure strengthening works has given a new confidence to the North Eastern states to march ahead with pride.

The Assam CM also remarked that due to the farmer friendly initiatives of the state government, export of agricultural products from Assam to England and Dubai as well as medicinal product from Palashbari to United States have become possible.

Further saying that “certain forces have been trying to derail the pace of development unleashed by the state government through misinformation campaign”, Sonowal said that the Citizenship Amendment Bill is a national policy and once the Bill becomes an Act the burden of the new citizens would have to be borne by the entire state.

The Nalbari Medical College will be the 13th medical college of Assam and will mark a new dawn for healthcare development in the region. pic.twitter.com/4Uhr8pw7CR

He said “attempts are being made to confuse people on this Bill” and reassured that the state government which had come to power with popular mandate of the people would do nothing to harm the interests of the local people.

Sonowal also urged AASU to extend full cooperation in successful implementation of clause 6 of Assam Accord for ensuring constitutional, administrative and legislative safeguard for the indigenous.

He also informed a 100-bedded cancer hospital with an expenditure of Rs. 19 crore would also be setup in the same campus.

He said the medical college will be completed in three years.

Sarma also said with the establishment of proposed engineering college at Ghograpar, the entire area would emerge as the nerve centre of academic and economic activities.