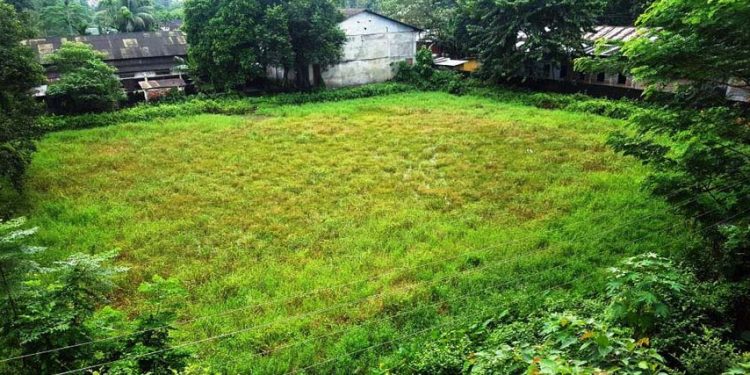 A plot of land to be developed under CIDF in North Lakhimpur. Image - Northeast Now

The schemes and plans made by Lakhimpur district administration for City Infra Development Fund (CIDF) appear to be flawed with impractical settings and unclear sites.

The Lakhimpur district authority has already taken up 21 different plans for the development of North Lakhimpur town under the CIDF without considering the basic infrastructural problems plaguing the public.

The North Lakhimpur town has no drainage system; no full and inter-linked pavements besides no parallel roads to connect the district headquarter with the surrounding areas.

The town badly needs more roads for smooth flow of ever increasing vehicular traffic and broadening of the existing roads.

However, the 21 plans selected for CIDF work have not included a single road project.

Instead of planning for the expansion of the town with more roads and alternative connectivity the Lakhimpur district authority has made plans on existing infrastructure repeatedly.

For example, the district administration has planned development of a modern market at the backside of PWD Dak Banglow with a parking facility worth Rs 11 crore.

It has planned another project of development of town club with lodging facility, conference hall and gymkhana club worth Rs 6 crore on the same plot of land.

Similarly, the project of development of vegetable market with parking facility near existing daily market in Ward No.9 worth Rs 8 crore is mere repetition of the same which already exists.

North Lakhimpur town has been affected severely by the lack of any waste management system and the plan taken up for CIDF work for the construction of a Solid Waste Management facility worth Rs. 2 crore does not specify the place.

The swimming pool project costing Rs. 2 crore also does not specify where it would be set up.

A project worth Rs 1 crore for the development of a tennis court in North Lakhimpur also mentions no specific place.

Interestingly, the implementing agency for the development of the tennis court has been given to PWD (Building) instead of any sports authority.

The 21 projects selected for North Lakhimpur have not also included the incomplete NL Indoor Stadium and the long earmarked outdoor stadium at Chanmari on NH-15 by-pass.

Disproportionate amount of money is being earmarked or projects on several existing sites like the beautification of three ponds (Rs 4 crore) and again separately for another pond along with the development of the district library (Rs 2.5 crore).

The striking point of all the project works for the CIDF works in North Lakhimpur is the construction of a multi-purpose town hall in Tyagkshetra costing Rs. 18 crore.

Tyagkshetra, an open space with a permanent stage in North Lakhimput town is a regular venue of many state and public events.

The scheme for a housing colony under Slum Development Programme in convergence with PMAY (Urban) in Ward No 13 of North Lakhimpur worth Rs 4 crore under Prohibition of Employment of Manual Scavenging and their Rehabilitation Act-2013 is also placed in the already existing infrastructure.

In a sense, the schemes selected by Lakhimpur district authority for the development of North Lakhimpur town under CIDF project lacks proper planning and assessments ignoring the most basic infrastructure needs and civic amenities affecting the district headquarter.

The schemes have failed to identify the critical city infrastructure deficiencies in North Lakhimpur with active public participation.

It may be mentioned that the Assam government has launched the ‘City Infra Development Fund (CIDF)’ for development of seventeen major towns of Assam by improving the urban infrastructure to ensure balance regional growth under State Own Priority Development (SOPD).