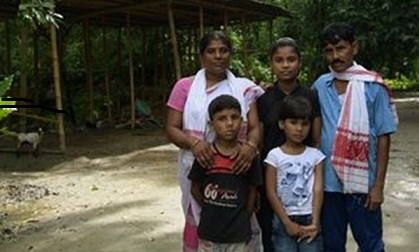 Hima Das with her parents and siblings. Photo credit - indianexpress.com

The proud parents of Hima Das, who has become the toast of the nation after she became the first Indian track athlete to have won a gold medal on a global platform, saw her “run live on television”, but, “we could not get to see her accept the medal due to loadshedding”.

Eighteen-year-old Hima Das who became a legend on Friday night (read for fetching a gold medal at the IAAF World Under-20 Athletics Championship 2018, in Tampere, Finland), belongs to the nondescript village of Khandulimari at Dhing in Nagaon district of Assam. In Khandulimari, power is a “blink-and-you-miss-me-affair” – the reason why Hima’s parents and sibling missed her “feat” on television.

Khandulimari since Friday is no longer a sleepy village but will go down in history as the village which gave India its legend – the sprint queen for whom today the track field is her oyster. From the local football grounds near her home to the track races around Assam to the tracks of Tampere, Finland – take a bow, Hima Das.

A report published in The Indian Express quoted her 52-year-old father Ranjit Das, a farmer, as saying, “I was a fast runner myself. When Hima told me that she wanted to pursue sports, I saw no point in stopping her. Her passion is real. And there’s no stopping passion like that.”

Ranjit, who is full of beans after his daughter’s feat, further stated, “I haven’t been able to sleep since Hima struck gold!”

The report further stated Hima’s mother as saying, “Neither have I slept since Hima’s feat. I kept wondering if we have enough food to cook for tomorrow. Were there enough vegetables? We did not expect so many people to show up at our place!”

Hima’s single-storeyed brick house (she stays in an extended family of 17 members) in her village almost looks like a wedding venue with people pouring in since Hima won gold – the house chock-a-block with media, relatives and friends. Hima’s family members are busy preparing for a “grand feast”. The party hasn’t stopped in her village since she won the gold medal.

Though Hima’s mother was “initially reluctant” to send Hima to Guwahati for training in 2015, she seems pretty “relaxed” now. But fear is something that doesn’t run in Hima’s blood. And every friend, every acquaintance, and practically anyone who knows her, vouches for that. “She’s not afraid of anything. Not even before a race, be it the CWG or a domestic race,” says Nabajit Malakar, who along with head coach Nipon Das first trained Hima in Guwahati’s Sarusajai Stadium.

Her friends recall how she “chased a Sumo and beat it!”  Statements like “football is for guys” would hardly bother her and once she was on the field, Hima would have the last laugh.

From Assam’s rice fields to Tampere, Finland’s tracks, Hima Das has created athletics history. And it is no mean feat that the sprinter had the spotlight on her in a field dominated by runners from powerhouses US and Jamaica!