Assam: Biotechnology mooted as means to increase productivity of fruits 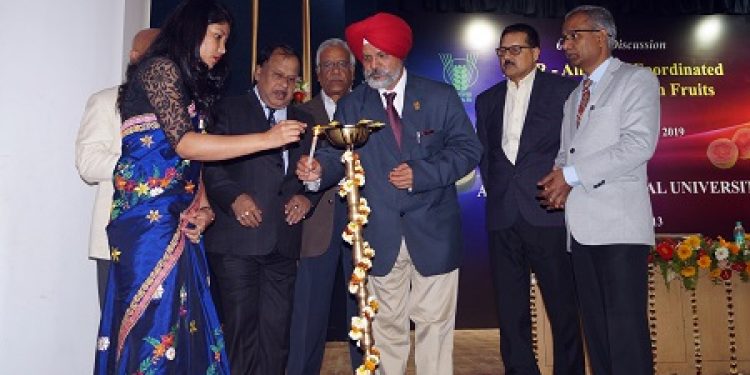 The concluding programme of the All India Coordinated Research Project sixth group discussion on fruits held at Assam Agricultural University in Jorhat of eastern Assam on Saturday lauded the high increase in production of horticultural crops in the country in the past two years and expressed concern over the almost 30 per cent post harvest losses.

Vice chancellor of Assam Agricultural University, K M Bujarbaruah while stating that there was plenty of room for increasing productivity said that biotechnology and other interventions apart from high density planting, could be explored to tackle pests and diseases in fruits.

“Here in the University work has been done to make chick pea resistant to pod borders. We should find out whether this can be applied to other areas like fruits plants to make them resistant to boomers, ” he said.

He further said that a survey should be done to find out how much AICRP has advanced fruit productivity and how much the farmers have done this on their own.

“In Assam the farmers have taken to growing apple berry, indigenous to Thailand, on their own to supplement their income, ” he said.

The VC also referred to an area here named Lichubari and said that now no lichee trees are found.

“We should find ways to revive this as the soil and environmental factors here are conducive for the growth of lichees. The lichees of Tezpur are also in no way inferior to those of Bihar and should be grown on a large commercial scale,” he said.

Bujarbaruah further said that he had asked the director, IiHR, Bengaluru to develop good varieties of fruit in collaboration with AAU.

Regarding the low shelf life of fruits, the VC said that something like what California Safe Soil, a start up, was doing could be done here.

The startup was collecting all the waste food from the markets and making liquid manure said to be 500 times more efficient than other biofertilisers.

He said that another start up Indigo Agriculture was testing soil borne microbes which could tackle pathogens in the soil and was coating seeds with these microbes.

The VC stressed that modern agricultural practices should be sustainable.

The VC said that if AICRP, Fruits did not deliver then it would go the same way as 30 more such AICRPs which was on the verge of closure for non performance.

Earlier Ashok Bhattacharyya, Director of Research, AAU referred to the tremendous potential of the North East in Horticultural crop production

WS Dillon, Assistant Director General (Horticultural Sciences II, ICAR, New Delhi delivered an extensive lecture on how much Horticultural crop production had increased in the past two years which augured well for India but was still way below the global average and much below European countries and USA.

BMC Reddy, former vice chancellor of YSR University, Andhra Pradesh said that the transfer of technology to the farmers was very poor, only about 17 to 20 per cent which meant that the increase was not all due to research output.

Utpal Kotoky, Professor, Horticulture, AAU and organizing secretary delivered the vote of thanks.