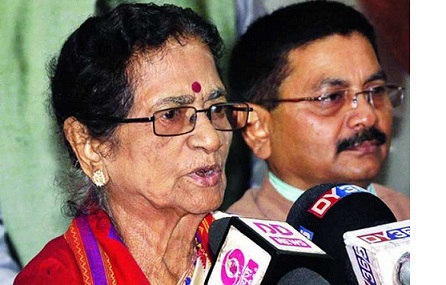 Senior BJP leader and sitting Lok Sabha MP from Guwahati constituency Bijoya Chakravarty has expressed her unhappiness over the slow pace of work related to Smart City project in Guwahati.

Chakravarty said that the MPs of Lok Sabha has immense responsibility not only for the representing constituency but also towards the state as a whole.

“During my time as a Lok Sabha MP, I have done a lot of things. I have brought in Rs 2,500 crore for the Assam government regarding the Smart City project but I agree that the implementation of the project is very poor here,” said Chakravarty.

“At least I not happy the way the works of smart city is going on. Its tool slow pace of work,” she said adding that while as a Lok Sabha MP she tried and succeeded bringing the money, the implementation of the project is up to the state government.

Chakravarty, who had represented the Guwahati Lok Sabha seat for three terms, was denied a ticket by the saffron party due to her age. Chakravary is 79. The party has fielded Queen Oja in place of Chakravarty in the forthcoming Lok Sabha polls.

Asked about some of the achievements of her as a Lok Sabha MP, Chakravarty said that she was instrumental in bringing many projects to the state. “Most of the new railway line projects including the intercity express and many other new trains which were introduced in Assam is due to my pursuance. I was also instrumental in sanctioning some of the most important embankments for Majuli,” said Chakravarty who was also Union Water Resource Minister in the past.

Asked about the party’s candidate for Guwahati constituency, Chakravarty said that the decision for the Lok Sabha seats are taken by the party leadership and as a dedicated member of the party has accepted it.

“I have nothing to comment on the tickets to candidates. It is the party’s decision as to who will contest from where. The party asked me not to contest and I am not contesting. In our culture, party is above all and I respect that,” she said.