Assam: Agricultural varsities to chalk out projects under aegis of ICAR 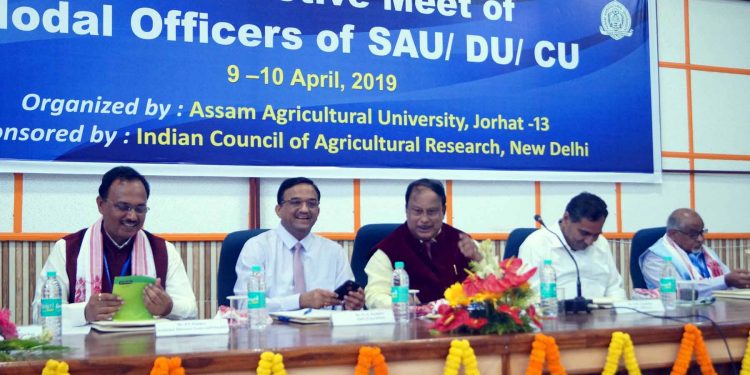 The fourth workshop of nodal officers representing about 80 agricultural universities of the country began the task of chalking out education, research and extension plans and programmes for their respective universities keeping in mind the objectives of the 14th five year plan to start from this year.

The interactive sessions of the nodal officers for the Agricultural Education Division of the Indian Council of Agriculture and Research (ICAR), New Delhi would be spread over two days beginning on Tuesday at the Assam Agricultural University in Jorhat of eastern Assam.

Addressing the nodal officers, most of whom were the deans or directors, Rathore said that they should be brand ambassadors of their respective universities.

“Everybody knows that ABCD means Any Body Can Dance but for nodal officers it is a double ABCD. A stands for awaken and awareness, B for bridging the gap between the university and ICAR to your requirement and also broaden the scope of work, C is collaboration and cooperation and need to extend your scope in teaching, research and extension, certification, etc, and D is to document properly the university’s contribution and the impact, and dissemination,” he further said.

Rathore further informed that ICAR accreditation was a must for getting grants and scholarships and though this had been opposed in the beginning now out of 75 Agricultural universities, 66 had been accredited. Even 25 private universities had come up for accreditation out of which four had been done and due to shortage of manpower others would be done over time.

He further said that a student from the agriculture college of Lovely Professional University had got a Rs one crore package.

“The nodal officer has to reform, refine and fine tune as well as furnish correct information to the vice chancellor on every aspect,” he further said.

Rathore criticized some universities who utilized funds provided by ICAR only in the last few weeks of the financial year but added that this year 99 per cent funds had been utilized.

Vice chancellor of Assam Agricultural University, K M Bujarbaruah said the nodal officers should come up with good visions and that whatever reforms are made would be for ‘our own success’.

He further said that support from ICAR was fantastic. AAU was annually given Rs 30 crore which was a very good amount for infrastructure development and other works.

He also suggested an additional Rs one or two crore for each university which the university could utilize for priority areas, which sometimes could not be done for lack of this fund.

Bujarbaruah further said that the elevation would reflect the overall status of the university and that the plans and project proposals would go through a lot of debate and should be fundable.