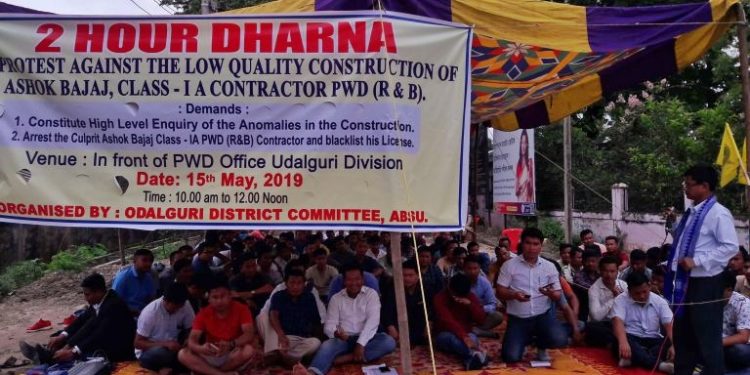 Assam’s Udalguri chapter of All Bodo Students’ Union (ABSU) staged a two-hour long dharna before the office of the assistant engineer of PWD at Udalguri demanding an inquiry into irregularities in drainage construction on Wednesday.

The students’ body has alleged large-scale anomalies and irregularities in the ongoing construction of the drainage from Golma Chowk to Udalguri town by use of low-quality cement and sand.

The ABSU demanded that proper quality must be maintained in the construction of the drainage system in Udalguri town by different contractors.

ABSU also submitted a memorandum to the chief minister stating that the ongoing drainage construction under PWD (Roads), Udalguri from Golma Chowk to Udalguri town collapsed within five days of the construction due to low-quality cement and utter negligence in the work.

The ABSU alleged that the PWD (roads) had failed miserably in monitoring the ongoing construction works due to which poor quality cement was used by the contractor.

The ABSU alleged that in all of the works viz Kalaigaon to Kabirali road, Residential Ashram School building at Barnagaon, Bhergaon Polytechnic, Harisinga Model Hospital, Bhairabkunda Irrigation and Golandi River embankment in the district the quality part was largely overlooked.