The All Assam Students Union (AASU) has welcomed the publication of the final draft of National Register of Citizens (NRC) on Monday.

AASU advisor Samujjal Bhattacharya while welcoming the publication of the final draft of NRC said ‘it is a historic day’.

He said the 38-year long struggle gave a fruitful result to the people of Assam.

“We are satisfied but this is only the first step to make Assam free from illegal migrants,” Bhattacharya told Northeast Now.

He also said that this is the result of the sacrifices of the martyrs who lost their life in the Assam Movement.

However, Bhattacharya said there are still miles to go.

The AASU had also appealed to the people of Assam to cooperate in the rest of the process of NRC regarding claims and objection for the greater interest of the people.

The influential students’ body also urged upon all quarters not to politicize the NRC issue.

Sweets were distributed at the Swahid Nyas in Guwahati by AASU activists after the publication of the final draft NRC. 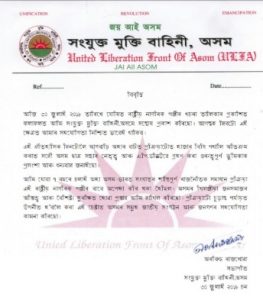 Bhattacharya also urged the government to seal the Indo-Bangladesh border and to sign a bilateral treaty with Bangladesh to ensure that no further influx of illegal migrants take place from the neighbouring country.

Meanwhile, the United Liberation Front of Asom – Independent (ULFA-I) has also expressed happiness over the publication of the final draft NRC.

In a press statement issued on Monday, the banned organization expressed its willingness to extend cooperation in preparation of the final NRC.

The outfit also expressed its gratitude to AASU and Assam Public Works (APW) for their continued pursuit of the NRC updation process.