Sonowal-led Govt has "miserably failed" to ease the sufferings of the people of the State: AASU 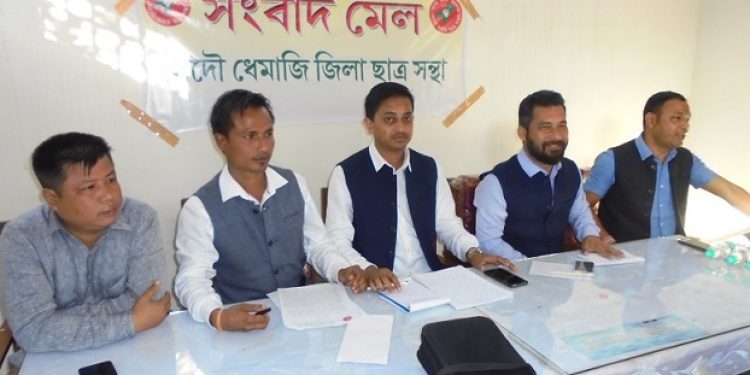 The Dhemaji district unit of the All Assam Students’ Union (AASU) has appealed to the voters to exercise their franchise in favour of fit and capable candidates having social responsibly.

The AASU leaders, while stating that they have lost trust on the political parties in Assam, urged the people to give their mandate towards those candidates, who have Assamese sentiments.

Addressing a press conference at Dhemaji on Wednesday, AASU vice president Chittaranjan Basumatray reiterated that people of the district have been facing numerable problems in terms of infrastructure development, community health, education besides recurring natural disaster like flood and erosion.

The students’ leader alleged that the Sarbananda Sonowal-led State Government has “miserably failed” to ease the sufferings of the people of the State during the three-year rule.

Speaking about the much-hyped Citizenship (Amendment) Bill-2016, Basumatary lamented that State Government was trying to enforce the Act ignoring the greater interests of the indigenous Assamese communities, while it is not properly conducting works pertaining to updating process of the National Register of Citizen (NRC) thereby contemplating illegal immigrants to enrol their names in the electoral rolls.

“The controversial Citizenship (Amendment) Bill if passed will change the demography of Assam, besides it will adversely affect the language and cultures of the indigenous people. Our democratic struggle against the Bill will continue until the proposed Bill is scrapped,” Basumatary said.

Stating that implementation of schemes such as Kanaklata Women Empowerment and old-aged pension implemented by the State Government are “mere eyewash” to befool the rural women, the AASU leader urged the Government to take up proper schemes for promotion of living standard by creating self employment avenues.

He also sharply criticised the Asom Gana Parishad (AGP), which is a partner in the coalition Government of the State, said it was an opportunists’ political party which works against the dignity of Assamese society.

Addressing media persons, AASU’s Dhemaji district president Dipak Sarma, while highlighting the pitiable state of the Education Department, said that more than 750 posts of primary and secondary teachers have been lying vacant for years. As such, out of 12031 LP schools, about 1020 schools are crying for infrastructure development and as many as 136 LP schools in the district are running with single teacher.

Sarma said that the AASU has prepared an 18-point ‘Charter of demands’ including socio-economic, educational, cultural and industrial development in the district besides beautification of Dhemaji town and development of the tourist destinations.

The ‘charter of demands’ of AASU also includes permanent solution to the Assam-Arunachal boundary dispute, four-lane extension of National Highway-52 passing through Dhemaji district and rectification of ongoing 2000 MW Lower Subansiri hydroelectric project in Gerukamukh as per expert committee’s suggestions.