Assam: 2 detained for attack on lady doctor at Digboi 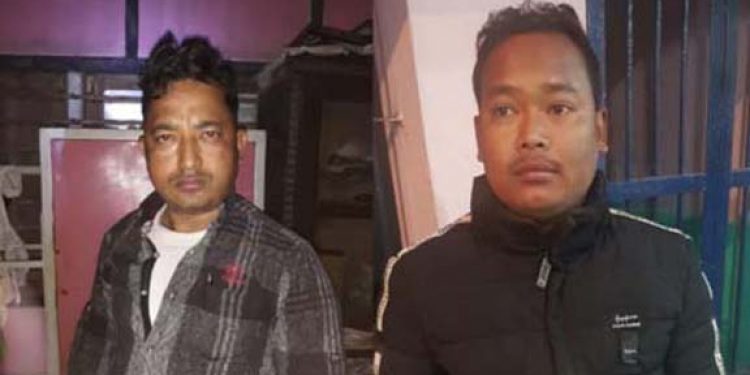 Two persons, who were detained by Digboi police on charges of being involved in attack on a lady doctor at Digboi. Image credit - G Plus

Police apprehended two persons on Sunday on charges of being involved in the attack on a lady doctor at Digboi Golai area of Tinsukia district during the 12-hour Assam bandh on Saturday.

The detained stone pelters have been identified as 24-year-old Jintu Mouth and 37-year-old Bipul Buragohain.

Dr. Divya Borthakur, a doctor serving for Coal India, was injured when her car was attacked by protestors at Digboi Golai area during the bandh called by the Tai-Ahom Yuva Parishad Asom (TAYPA) demanding ST status for the community and scrapping of the Citizenship (Amendment) Bill, 2016.

Dr. Borthakur is an eye specialist at Coal India hospital in Margherita.

Dr. Borthakur said she had received injury on her face when her car was attacked by bandh supporters near Digboi’s Golai area.

According to information, after dropping her husband at Digboi Civil hospital, Dr Borthakur was on her way to Margherita with her Swift Dezire (AS 06-Q-5636) but suddenly some bandh supporters attacked her car in which she was injured.

The 12-hour bandh paralysed normal life in upper Assam on Saturday and incidents of violence were reported from various places.

The two persons were detained by police on the basis of an FIR lodged by Dr Borthakur at Digboi Police Station.

Bora had said, “We are finding the miscreants and as per law we will take action against them.”