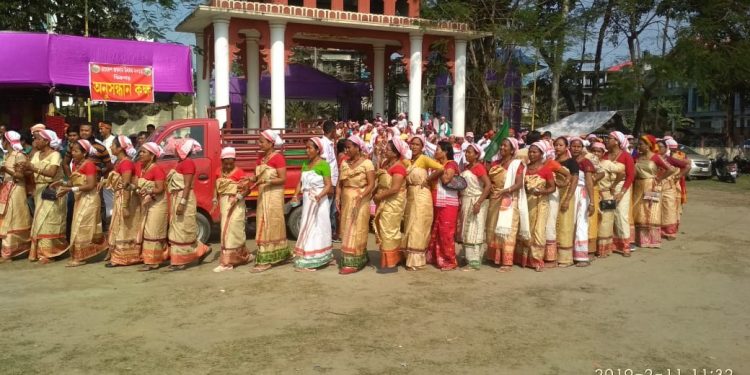 The three-day 13th Joydam festival of the Deori community has been underway at Chowkidinghee field in Dibrugarh.

The festival, which was inaugurated on Sunday, will be wrapped up on Tuesday.

The festival is being jointly organised by Dibrugarh Deori Unnayan Samiti, Dibrugarh district unit of All Assam Deori Students’ Union and Mehubasi Jaksa.

The people belonging to the Deori community of Assam and Arunachal Pradesh have gathered at the festival in large numbers wearing their traditional attires.

”We are the primitive community living in Assam and Arunachal Pradesh. Our community is rich with different cultures, traditions and our food habit is also different from others. So, we have created a village-like atmosphere here where everyone can get glimpses of the rich culture, tradition of our community,” the cultural secretary of the festival told the Northeast Now.

People from all walks of life gathered at the festival site to enjoy the festival which has been organised for the first time in Dibrugarh.

“Our culture will be displayed in the three-day festival where the people from other communities can know us closely,” said Deori.

Ethnic food stalls and other stalls have also been installed at the festival.

A huge cultural procession was also taken out in Dibrugarh as part of the festival.

On Tuesday, the concluding day of the festival, a seminar will be organised on the topic ‘ Identical crisis of indigenous Deori ethnic culture and its action plan for preservation and development’.

The seminar, to be started at 9 am, will be chaired by writer Dr Saranan Deori.