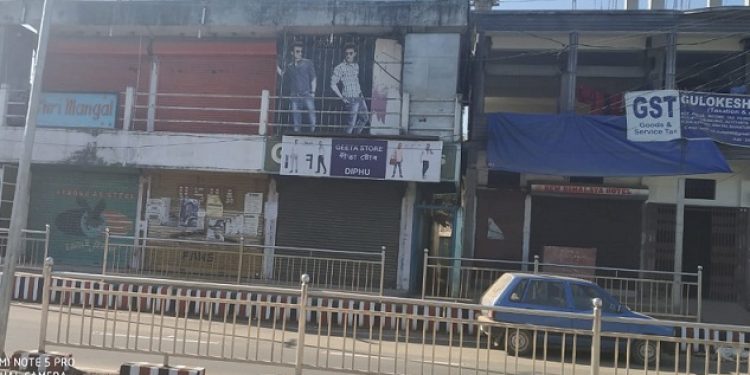 The organisations called for the 12-hour bandh from 5 am to 5 pm in protest against Clause 8 of the Bodo Accord which concluded peacefully without any untoward incident. However, train services were not affected.

In Diphu, there were fewer vehicles plying on the road. In the morning, students were seen going to schools on foot and later returned to their homes. Some parents were seen ferrying their children in vehicles pasted with ‘EXAM’ signs to school and back.

In general, educational institutions were shut down along with businesses and banks although few private vehicles seen on the road.

Karbi Anglong Autonomous Council Secretariat here, the nerve centre of the hill districts of Karbi Anglong and West Karbi Anglong saw normal attendance by staff in the morning, but towards the afternoon it wore a deserted look.

It is similar in other parts of Karbi Anglong. In Howraghat, Bakalia and Bokajan, the response was total but the students who had school examinations were exempted from the bandh.

The activists took out procession from Hanjanglangso, an area of Bokajan.

The NH 36 which passes through Bakalia remained quiet. In West Karbi Anglong, Hamren, Vothatlangso, Donkamukam, Tumpreng and Kheroni were seen shuttered with all schools, banks, Government offices were shut. Though in the early morning few bikes and vehicles were seen plying on the roads but the picketers intercepted them. Overall the bandh was peaceful in the district till the time of reporting.