A memorial for Risso Tari who died in the firing Image credit: Facebook

The relatives of Arunachal Pradesh youth Risso Tari, who succumbed to his bullet injuries, in the firing on Friday, sought justice for him.

The youth was injured in front of his sister’s house in the firing by the para-military forces directed by the state government.

In the violent protests going on in the state, three persons have died till now.

In the last few days, the situation has gotten worse with violence marring different parts of the state.

On Friday, different organizations like ALSU, NESA, and various DSU had called for a 48-hour bandh demanding scrapping of granting PRC to the six non-Arunachal Pradesh Scheduled Tribe communities of Namsai and Changlang districts.

The bandh called by a conglomerate of 18 students’ bodies and civil society organizations witnessed instances of vehicles being burnt, road being blocked and the agitators resorting to stone pelting at several places of the capital city of Arunachal Pradesh. 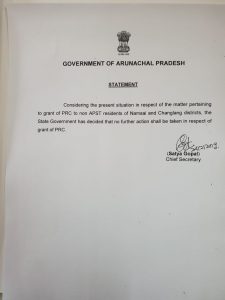 Rumours and misinformation further fuelled the protests that have since attacked government buildings, vehicles with the Army being called in to control matters.

The anger escalated after the firing on the protestors which injured three, of whom one died.

The government, in view of the situation, had taken a rain check on presenting the report in the assembly.