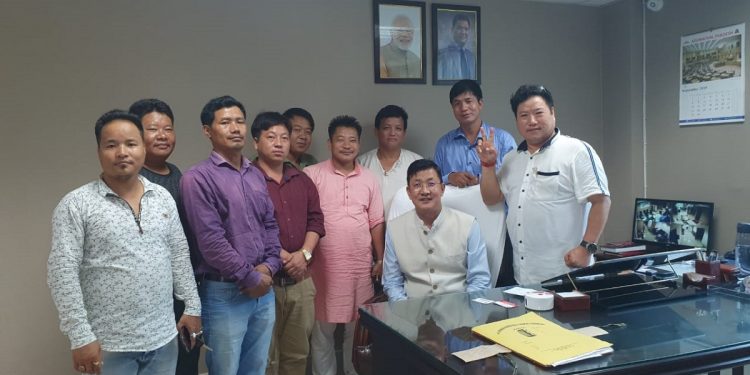 The All Arunachal Pradesh Public Transport Federation (AAPPTF) led by its president Dobing Sonam, called on Transport minister Nakap Nalo at his office and sought his immediate attention on the ever growing charges for installation of high-security registration plates (HSRP) on vehicles by the firm concerned.

The AAPPTF, during the call on also submitted a representation in this regard to the transport minister in which it mentioned that the private firm which has been given the responsibility to carry out the HSRP installation is charging exorbitant rates, hence violating the official notification of the government.

Going by the Supreme Court order, the department of transport, govt of Arunachal Pradesh vide its notification date March 21, 2012 had directed that all motor vehicle owners should affix HSRPs on their vehicles.

For this the rates of Rs 660, Rs 798, Rs 1568 were fixed for two, three (also light and passenger vehicles) and four wheelers respectively.

Unfortunately, the aforementioned rates were never complied with and the prevailing rates are 3-4 time higher than that of the neighbouring states.

It is understood that every state has their own mode of generating revenues and a state cannot be compared to another, however, the difference here huge and is a case of major concern, the AAPPTF mentioned in its representation.

This is affecting the common people in particular and all the public transports of the State in general, it added.

The federation also said that, it had in 2013 sought the intervention of the then chief minister to look into the issue and it was assured that the matter would be looked into, but the same has not been the case even after the passing of six years.

The AAPPTF, on the occasion also highlighted that most of the government’s means of transport do not have HSRPs installed in the vehicles and appealed to the minister to issue strict directions to all concerned for installing the same.