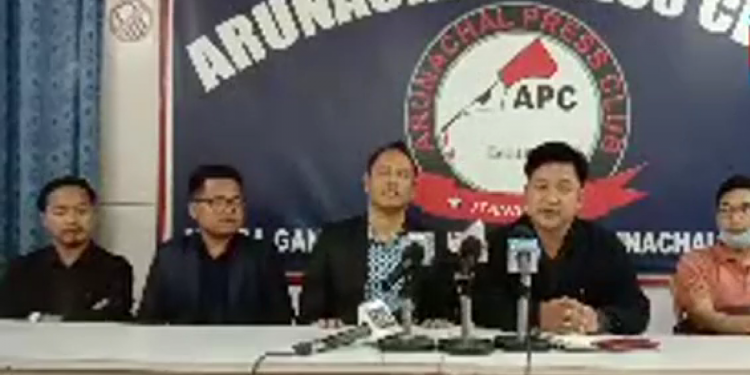 A video grab of the press conference at Press Club, Itanagar.

Addressing a news conference at the Press Club in Itanagar on Wednesday, the Tribal Identity Movement leaders said the state government has failed to implement the Act even after it was passed by the Assembly and a gazette notification issued around four decades back.

The group termed the non-implementation of the Act as ‘deprivation’ to the tribal population of the state.

Debaang Tayeng, one of the leaders of Tribal Identity Movement said “no guidelines with regards to the implementation of the Act have been issued by the authorities to deputy commissioners concerned till date and the state agencies also do not have a single data on religious conversion.”

He further said they will hold a peaceful rally demanding implementation of the Act in the state capital on March 5.

“The rally would start from the Ramakrishna Mission Hospital and culminate at the Indira Gandhi Park,” Tayeng said while appealing to all to join and support the rally.

The Arunachal Pradesh Freedom of Religion Act, 1978, though never enforced in the state, prohibits conversion from one religious faith to any other religious faith by use of force or inducement or by fraudulent means and for matters connected therewith.

Arunachal Pradesh chief minister Khandu had in 2018 made an announcement to repeal the Act.

He had, however, assured that the state government would consider the views and suggestions of every stakeholder before that.

According to the 2011 census, Christianity accounts for 30.26% of the state’s total population while Hindus account for 29.04% and 26.2% of people practice other religions.

The demand to implement the law was raised in Arunachal a day (February 23) after the Uttar Pradesh Prohibition of Unlawful Religious Conversion Bill, 2021 was passed by the UP Assembly by a voice vote.