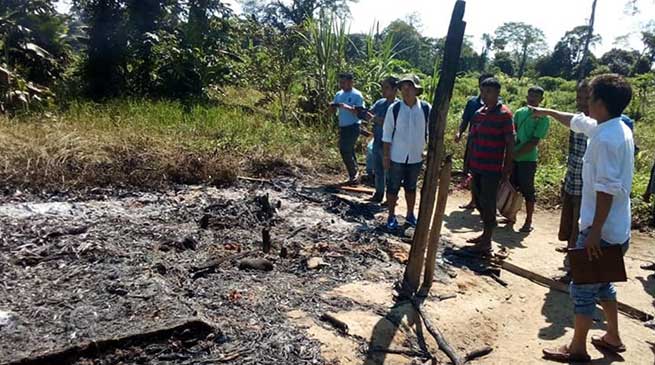 14 houses belonging to Adi community were torched by miscreants on October 15.

Tension continued to grip the residents of Namsai district in Arunachal Pradesh after miscreants torched 14 houses at Mabira area.

Simmering tension has promoted the administration to clamp prohibitory order in the district.

14 houses belonging to Adi community were torched by miscreants on October 15 near Khai-Hay Nallah under Tengapani Forest Reserve.

Since then, tension continued to grip the residents of the area.

The situation on Friday took an ugly turn Adi Students Union (AdiSU) took out a massive rally in protest against the incident.

The as protesters clashed with paramilitary forces at Jengthu Bridge.

AdiSU, in a representation to the Namsai DC alleged that members of All Tai Khampti Singpho Students Union (ATKSSU) were involved in the arson.

ATKSSU, however, denied their involvement in the incident.

The meeting decided to send a peace delegation to meet the affected families in Namsai.

The delegation would include health minister Alo Libang, and MLAs Ninong Ering and Jignu Namchoom, an official release said.

Felix has also called on members of the Arunachal Indigenous Tribes Forum to intervene in the matter and maintain communal harmony.