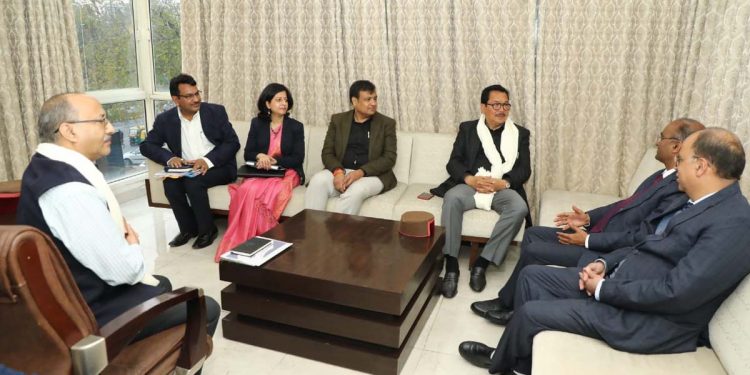 In a major thrust to hydropower sector of Arunachal Pradesh, the Satluj Jal Vidyut Nigam Limited (SJVNL), a central PSU, has shown its eagerness to develop hydropower projects in the state.

The Central Public Sector Unit (CPSU) is keen to develop hydropower projects in Arunachal Pradesh up to 15000 MW.

The development came after a team of SJVNL, led by its chairman and chief managing director Nand Lal Sharma, called on Arunachal Pradesh deputy chief minister Chowna Mein at his office in New Delhi on Saturday.

They also handed over a written request stating their interest to which the latter responded in a positive note and assured of looking into their proposal.

SJVNL is a joint venture of the government of India and government of Himachal Pradesh and the company has a ‘mini ratna’ status.

The JSW team also submitted an expression of interest for the development of a few mega hydropower projects.

It was informed that Mein while inviting the companies to invest in the state said that the Arunachal Pradesh government would extend all possible assistance as partners to the development process.

Had a meaningful interactions with potential power developers, CMD of Satluj Jal Vidyut Nigam Limited, a CPSU and VP of Jindal South West Hydro Energy Limited, who called on me at Delhi today. They expressed their eagerness to develop Hydro-Power projects in Arunachal Pradesh. pic.twitter.com/t761cCNChZ