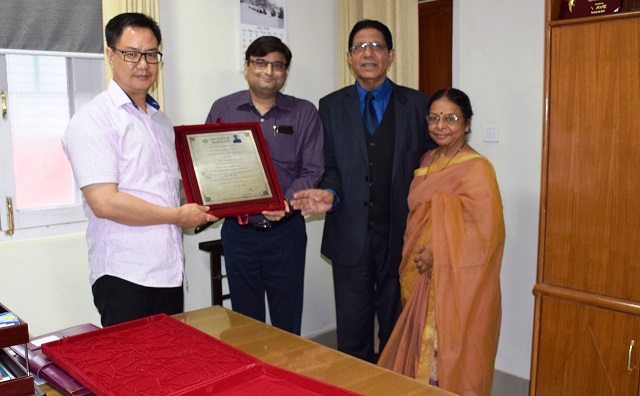 The Arunachal University of Studies, Namsai, a private university established in 2012, has conferred the Honoris Causa Doctor of Literature Award to MoS Home Affairs Kiren Rijiju during a brief formal meeting at New Delhi. The award instituted by the university to promote the holistic educational cause was bestowed upon by a team of three scholars led by Pro-Chancellor of University Vishva Lochan and Vice-Chancellor Prof V K Kawatra.

“It is like dream comes true and feel extremely happy to have become a part of growing educational institutions like this and assure of all possible cooperation for the development of the University in the days to come,” Rijiju said.

Rijiju expressed his happiness over the development of the University.

“It is really imparting quality higher education to the upcoming generation of the state which will become the foundation in transforming economic conditions of North East and Arunachal Pradesh making it more prosperous in coming years,” Rijiju said.

The university management at Namsai informed that Rijiju held the view that the University is gradually becoming one of the largest and most progressive institutions of the region under self-sponsored category in the field of higher education.

“Had there been such institutions and centers of learning in 1970 in the state of Arunachal Pradesh, the present education scenario in the region could have much better been altogether different”,  Rijiju said indicating towards the diminishing trends of the quality education after the overall outcome of the CBSE result in the protected land-locked state of Arunachal Pradesh surfaced.

“Arunachal University of Studies is the only UGC recognized University of Eastern Arunachal Pradesh and has brought laurels in the field of education with its excellent education methodology, infrastructure and striving  continuously to promote the desirable cause of generating quality human resource with the help of its 12 constituent faculties,” he said.

Meanwhile, Vishva Lochan the Pro-Chancellor of University reiterated that the Arunachal University of Studies in Namsai being the centre of quality education within the easy reach of the local students from the nearby districts of Changlang, Lohit, Tirap, Longding beside Namsai intends to bridge the education gap in the region which has been felt from quite sometime time and is creating more appropriate linking between the school education and higher education in the region without having  to migrate outside in their educational pursuance.