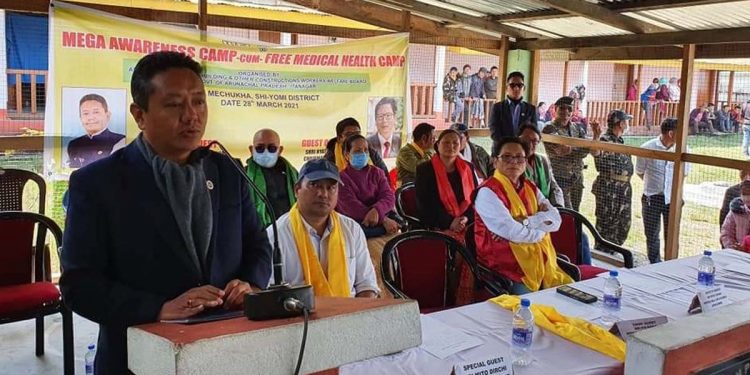 Arunachal Pradesh Assembly Speaker Pasang D Sona on Sunday called upon the labourers working under various departments and agencies to get themselves registered to avail its benefits.

Speaker Sona asked the labourers to get registered with the Arunachal Pradesh Building & Other Construction Workers Welfare Board (APB&OCWWB).

Sona was addressing a mega awareness-cum-free medical camp organized by the Arunachal Pradesh Building & Other Construction Workers Welfare Board at Mechuka in the Shi-Yomi district.

Lauding Board chairman Nyato Dukam and his team for reaching out to the labourers in remote Shi-Yomi district, the Speaker hoped that the camp would go a long way in becoming beneficial for the needy labourers.

Expressing happiness over the huge participation of labourers from every nook and corner of the district, Sona announced to bear 50% of the registration fee for the labourers from his side, and instructed the Labour officer to do the needful.

The Arunachal Pradesh Assembly Speaker also encouraged the labourers to avail the medical camp and get themselves their family thoroughly checked.

Board chairman Dukam informed that Shi-Yomi, being one of the newly-created districts of Arunachal Pradesh, was selected for the awareness camp.

Stating that several benefits of Board have not been reaching the labourers of the district due to the absence of officials, Dukam said a registering officer along with supporting staff will be posted in the district soon to help the labourers.

He, however, emphasized that every labourer must get themselves registered with the Board to avail those benefits.

“I came here personally not only to create awareness but to ensure that every labourer gets their rights,” the chairman said.

Highlighting several benefits that the board is extending to the registered labourers, Dukam told them to register themselves and claim their rights.

Around 800 labourers from across the district participated in the programme.