IAF was ready for attack on POK in 2008, says ex-commander of Su-30 squadron

Hours after air-borne retaliatory strikes across terror camps in Pakistan on Tuesday morning, one Arunachal Pradesh-based ex-fighter pilot said the IAF was “ready” for a similar strike in 2008, but did not get the green signal from the government.

Group Captain Mohonto Panging, who hails from Pasighat in Arunachal Pradesh, tweeted: “Finally terrorist camps in POK hit by Laser Guided Bombs from IAF Mirage 2000. We were about to hit POK camps in Muzzafarabad after Mumbai attack in 2008. Finally the Govt did not decide. Our Sukhoi Sqn under my command was involved. Der Aaye Par Durusht Aaye. Cheers!!” 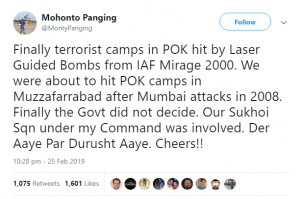 The tweet is noteworthy because Group Captain Panging is the only person from Northeast India to Command a Sukhoi-30 Squadron. He has flown over 3,300 hours on various aircraft like Sukhoi-30, Jaguar, Hunter and Mig-29.

The tweet made it obvious that the ex-air warrior was euphoric with the daring strikes by IAF on Jaish-e-Mohammed (JeM) terror camps in Balakot, Chakothi and Muzaffarabad.

Group Captain Panging has also been decorated with the Presidential Award – the Vayu Sena Medal (VM). After retirement, he is a social worker in Pasighat, and a regular column writer in newspapers.

In fact, Group Captain Panging is the first retired fighter pilot of the IAF to react within hours of the air strike that they were ready for a similar strike almost 11 years ago, but could not go ahead with it because they did not get the green signal from the government. 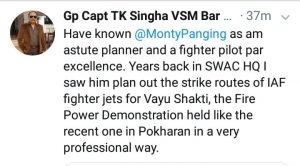 Another retired IAF fighter pilot from northeast, Group Captain Tarun Singha commented on Mohonto Panging in a tweet message, and said: “Have known @MontyPanging as an astute planner and a fighter pilot par excellence. Years back in SWAC HQ I saw him plan out the strike routes of IAF fighter jets for Vayu Shakti, the Fire Power Demonstration held like the recent one in Pokharan in a very professional way.”