The doctors will also not attend to COVID-19 patients during the course of their protest. 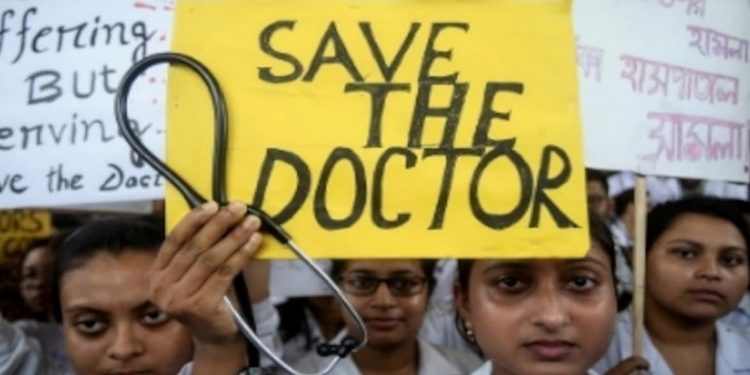 Doctors in Arunachal Pradesh are all set to launch a two-day cease work protest from Friday (May 7).

The cease work protest of the doctors will begin at 6 in the morning of May 7 and will continue till 6pm of May 8.

However, emergency services will remain unaffected.

The doctors will also not attend to COVID-19 patients during the course of their protest.

The doctors protest in Arunachal Pradesh comes in response against “attempted mob lynching” of two doctors of Samaritan Hormin Hospital at Naharlagun in Itanagar Capital Region.

Two doctors of the Samaritan Hormin Hospital were allegedly physically assaulted by an angry group of attendants after a female patient succumbed to COVID-19 in the hospital.

Moreover, the angry mob had also vandalised property of the hospital.

The two doctors who were allegedly attacked are: Dr Tabu Muri and Dr Nabam Jadav.

“All the Doctors of Itanagar Capital Complex would go for two days (Friday and Saturday) shut down of Routine Works excluding Emergency and COVID-19 duties from 6am of 7th May till 6pm 8th May 2021 as a mark of protest against the attempt of mob lynching & vandalism,” the IMA-AP said.

The Samaritan Hormin Hospital in a statement claimed that the patient’s family was reluctant to accept the explanations for the death of the female patient and “they started vandalizing the hospital property and manhandled the doctors and staff of the hospital.”

The Arunachal Pradesh State Commission for Women (APSCW) has taken sua-moto cognizance of the woman’s death in Naharlagun’s Hormin Hospital, wherein her relatives alleged that the cause of her death was “medical negligence.”

While, the APSCW condoled the death of the woman, it has asked the Itanagar Capital Complex SP to conduct a fair and unbiased investigation into the case.