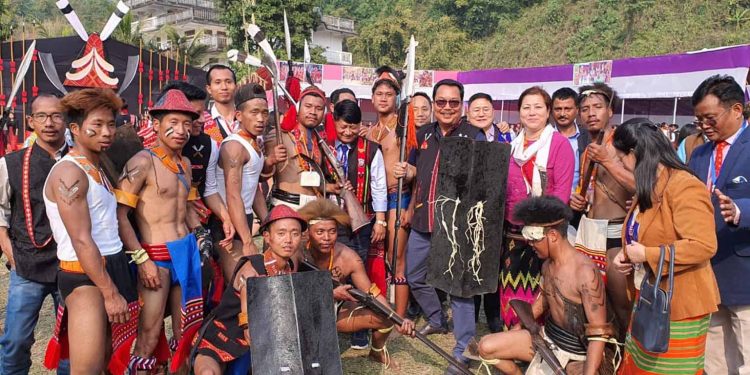 Arunachal Pradesh Deputy Chief Minister Chowna Mein said the state government would soon form a committee to look into the matter of re-opening the Stilwell Road.

Mein said that while attending the Oriah festival of the Wancho community in Itanagar on Sunday.

“The state government would appeal the Centre to prioritize the restoration of the road,” Mein said.

“The road, once re-opened, will ease travel and cut distance for people living on either side of the Indo-Myanmar border,” he reiterated.
“It would deepen the age old cultural linkage and help promote spiritual tourism. Further, it would act as a catalyst for cross border trade,” Mein added.

The Stilwell Road or Ledo Road was constructed by the Allied Soldiers lead by America during the Second World War.

Mein reiterated that the northeast region is the gateway to ASEAN countries in India and Myanmar shows the route to India to larger ASEAN nations.

“India’s ‘Act East Policy’ is on the lines of improving people to people contact which is fundamentally envisaged for building socio-cultural relations, increasing trade ties, promoting tourism and developing the economic scenario of the South East Asian region through outreach initiatives,” Mein said.

The minister also raised issues related to the creation of infrastructure and development in border areas so to curb the migration of people from border villages to cities.

“Arunachal Pradesh has all the potential to become the fruit bowl of the country,” he said.

The state also has the potential to become one of the tourist hotspots in India,” he added.

“However, the need of the hour is how to utilize these natural resources to our advantage and to draw more tourists,” he further added.

Arunachal is a land of multi-tribes and each and every tribe has their own distinct cultural identity, Mein said while calling upon the youths to become the torchbearers in promoting, preserving and protecting their age old tradition and culture.

Mein also lauded the Wancho Community for jealously preserving and protecting their rich cultural heritage despite the challenges of modernization and western influence.

He further informed that the state government will provide all possible support to every tribe for carrying out research and documentation works to safeguard their culture and tradition.

“The government has already provided funds to the research department document the healing methods of the Idu-Mishmi tribe and the same is in the verge of completion,” Mein informed.

He added that the state government is also willing to involve one and all in its development process.

He called upon all the community-based organizations, NGOs and educated youths to come forward with their innovative ideas and suggestions to be incorporated in the upcoming budget.

Further urging the youngsters to shun consumption of drugs/opium, Mein asked them to take responsibility for building up the Society.

“Our state has a rich pool of young talents and the need of the hour is to instil confidence and prepare them to be determined and competitive,” he added.

He urged the youths to take full benefits of the government-subsidized schemes for starting new entrepreneurship ventures and to make themselves self-reliable.