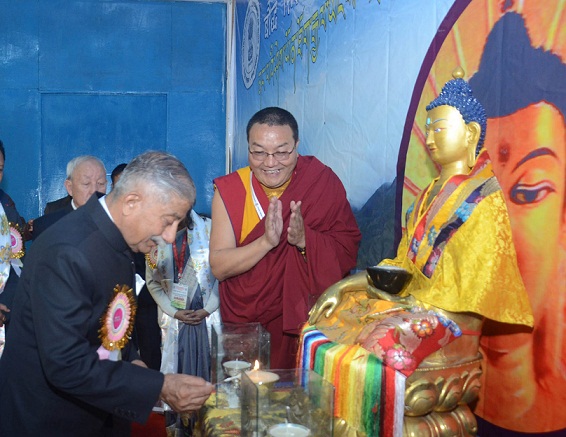 Arunachal Pradesh Governor B D Mishra on Monday said Buddhist education is more important than development of Buddhism itself.

Inaugurating the three-day National Conference on Buddhist Education at Central Institute of Himalayan Culture Studies in Dahung in West Kameng district of Arunachal Pradesh he said, “I am delighted to discuss with the delegates and students of the centre here. It is an earnest need of time to develop Buddhist Education from the secular and academic perspectives for creating happy individuals to establish peace in society at large.”

In her key note address Professor Madhumita Chattopadhyay of the department of Philosophy of Jadavpur University, Kolkata said that the curriculum of Buddhist systems of education was mainly spiritual in nature .The chief aim of education being the attainment of Nirvana, study of religious book was very much important. Hence, Suttanta, Vinaya and Dhamma were the main subjects prescribed for studying this type of curriculum.

Participants from across the country are presenting 50 numbers of paper on the Buddhist Education here during the three days conference.

Addressing the opening session speaker of Arunachal Assembly Tenzing Norbu Thongdok said  policy makers at the national and state levels in the country must compose an Anthem on peace based upon Buddhist philosophy in respective official and local languages so that peace, through recitation of songs, is ingrained in the most intense way in every mind and heart.

He also reiterated what Lord Buddha has said—’Desire is the root cause of evil.” Detachment is a precondition to attachment with Lord which will be possible only when there is an assiduous attempt to attain enlightenment.

Director of the CIHCS G N Tashi Bapu in his welcome speech said this conference is highly specialized, professional and result orientated endeavour of CIHCS to attest academically what Prime Minister Modi remarked on the Buddha’s teaching that everyone knows that 21st century is Asias’s century.