ILP drive will continue as it is framed by state law for protection of indigenous people: Bamang Felix 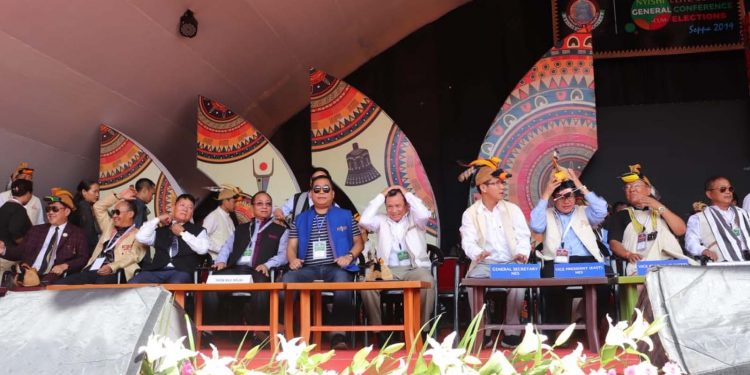 A view of the 12th general conference-cum-election of the NES at Wessang near Seppa on Monday. Image credit - Northeast Now

Arunachal Pradesh’s Nyishi leader Bengia Tolum on Monday requested the writers from Assam to stop using the word ‘Dafla’ in their writings.

Nyishi Elite Society (NES) president Tolum made this appeal at the 12th general conference-cum-election of the NES at Wessang near Seppa in Arunachal Pradesh.

Tolum said, “The word ‘Dafla’ is derogatory and it was removed years ago constitutionally.”

The main origin of Nyishi language has been pointed out by George Abraham Grierson as ‘Dafla’.

But after removal of the word constitutionally, calling ‘Dafla’ now is a criminal offence.

However, a few writers from Assam, as alleged, still use this word in their writings.

Around 3,000 Nyishi delegates on Monday attended the 12th general conference-cum-election of the NES, a leading organization of the Nyishi tribe.

The delegates have come from all eight Nyishi-inhabited districts of Arunachal Pradesh.

Addressing the gathering, NES president Bengia Tolum urged all the Nyishi legislators to avoid the culture of offering jobs and contracts during elections.

He said due to such culture, most of the students are not much interested in studies and other opportunities.

Speaking on the cordial relation between Arunachal and Assam, Tolum told Sahitya Sabha president Dr Rajbongshi that the people of Arunachal “don’t have a problem with the Assamese but with those who are not Assamese in Assam”.

He said this while clarifying the misunderstanding created by a few Assam media groups on the Inner Line Permit (ILP) drive.

Tolum said the reports telecast on various news channels were half of the information.

“We have been good brothers since many decades and people should not misunderstand the ILP checking conducted by the ANSU,” he said.

Dr Rajbongshi assured that misinformation regarding the ILP checking will be cleared.

He also said if there is any kind of problem and misunderstanding among the neighbours, one can inform him so that the Sabha can sort out the problem.

“NES is a part of ASS which I openly declare for the welfare work of both the states,” said Rajbongshi.

Rajbongshi also assured of working for the indigenous rights and for the state and country as a whole. “We will maintain peace by love in the heart, not by arms in hand,” he said.

Praising the culture, tradition, language, foods and attire of the tribe, Rajbongshi welcomed the NES for any suggestion on preserving the tradition and culture and generating a common script.

Tolum said the “Bopia” (headgear) is a symbol of dignity for the Nyishis and from the 12th general conference every new president will have to wear it for preserving the culture and tradition of the tribe.

Speaking on the occasion, Arunachal Pradesh home minister Bamang Felix said the ILP drive will continue as it is framed by state law for the protection of indigenous people.

“An estimated 90% of crimes in the state are executed by criminals from outside the state who illegally entered,” he said, requesting the ASS president for peace and tranquility in the border areas.

He also said chief minister Pema Khandu has assured a bridge which will connect Seppa town and New Seppa.