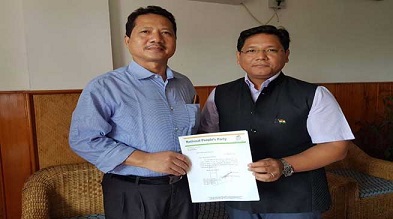 In a significant political development ahead of the 2019 general elections, 7 out of the 9 legislators from the People’s Party of Arunachal (PPA) have joined the National People’s Party (NPP).

Kabak said, “The 7 MLAs have already the joined the party on July 12 at its headquarters in Shillong in presence of NPP president Conrad K Sangma and an official announcement would be made soon as they were unable to meet the legislative assembly speaker to complete the formalities.”

“Now we have seven MLAs in the State who represent the NPP. We will work in alliance with the BJP led government led by Chief Minister Pema Khandu,” added Kabak.

NPP State vice president and spokesperson Nima Sange said, “Since NPP is already an alliance under the North East Democratic Alliance (NEDA), the joining of seven MLA will automatically fall under the guidance of the present state government BJP.”

The official announcement of the merger by the MLAs will also be prepared under the NEDA in a meeting chaired by Himanta Biswa Sarma soon. The meeting will also be attended by Chief Ministers Conrad K Sangma and Pema Khandu, Sange said.

NPP is growing stronger each passing day and it along with the BJP will always work for the development and welfare of the state, he added.

Sange also said, MLAs from both BJP and NPP would contest in the ensuing 2019 general elections from their respective places, however, there will be no pre-poll alliance.

“The NPP will not project any candidate as Chief Minister but will focus on a common representative,” Sange said.

He also clarified that with the merger, the NPP has no intention to fill up the portfolio of a Cabinet minister or any agreement has been made in this regard.

The National People’s Party was formed in the State on August 7 last year after a large number of Nationalist Congress Party (NCP) leaders including Kabak and Sange dissolved the party and merged with it.

The dissolution of the NCP in this BJP-ruled the State came after NCP leaders alleged that NCP President Sharad Pawar showed ‘no keen and active interest’ in Arunachal Pradesh.

Founded by, PA Sangma after his expulsion from the NCP in July 2012, NPP is a national political party in India. Meghalaya Chief Minister Conrad K Sangma is the present president of the party.

The PPA, on the other hand, is the lone regional party of Arunachal Pradesh.

Repeated calls made to its president Kahfa Bengia to get his take on the merger went unanswered.

With the merger, the 60-member Arunachal Assembly now has 48 BJP, 1 Congress and 2 PPA MLAs.