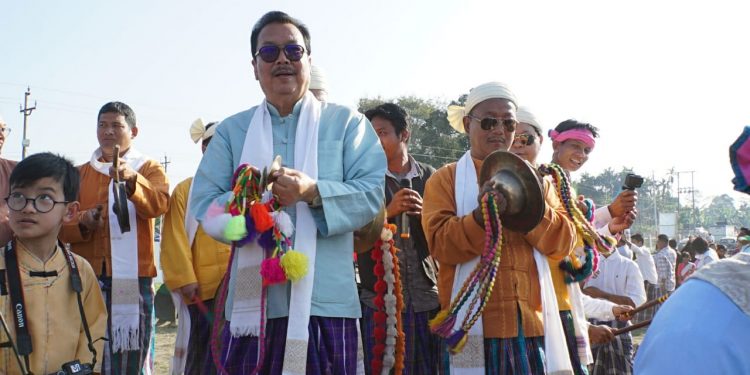 It is being held at the festival ground of Nalung near the Kongmu Kham or the Golden Pagoda.

The festival which will conclude on November 29 is being celebrated by the Tai Khamti as per their lunar calendar.

Arunachal Pradesh home minister Bamang Felix graced the inaugural day as the chief guest amidst the presence of a host of legislators of the State.

The chiefs and members of CBOs, HoDs, including the deputy commissioner and superintendent of police were also present.

Cultural troupes representing various Tai ethnic communities including those from Assam and Manipur also participated in various activities on the first day of the fest.

Felix in his address wished the Tai people on the occasion of the dawn of a new year and appreciated the efforts at keeping the age old heritage and culture alive.

He was of the view that in such kind of celebrations, tribe and community leaders should be invited instead of ministers and legislators so that a more strong bonding get to be built between communities which will foster unity and in the long run help in creating an atmosphere of bonhomie.

Taking the opportunity he also spoke about Hamara Arunachal Abhiyan (HAA) which is a brainchild of the government to make the common people be part of the law and order machinery and help in effective policing.

He also raised concerns on the prevailing drug menace in the area and said that it was the responsibility of all stakeholders to come out and fight the menace for a vibrant society.

Deputy chief minister was earlier felicitated by the festival celebration committee for his long and sustained efforts in preserving and promoting the Tai Khamti culture and literature.

Besides he was recently awarded by Fame India and adjudged one of the best performing ministers in India.

Mein spoke on the background history of celebrating the new year festival and his efforts at encouraging the younger generation to imbibe the age old cultural heritage.

He appealed the youths to work towards a bright future for self and the society.

He also touched upon HAA and the apprehensions over CAB 2016.

He informed that the State Government’s stand has been made clear that it will not accept CAB 2016 as per the larger interest of the people of the State.

He further assured the present government will not take any steps contrary to the wishes of the people.

Mein also dwelt on the menace of drugs and appealed to collectively make efforts to contain the dangers posed by drug abuse.

Lumla MLA Jambey Tashi and Pasighat West MLA Ninong Ering also spoke and wished the Tai people on the occasion of the festival.

General secretary of Tai Khamti Development Society at the outset spoke on the Tai lunar calendar system and the various Tai etnic communities world over who are celebrating the festival on the same day.

Later everyone witnessed the traditional boat race followed by community feast and dance.

In the night the programme line up were Tai Idol, Mr and Miss Poi Pee Mau Tai 2114 and other performances by at least 19 troupes.

Women off-roading and release of hot air balloons will be the attractions of the festival.