Lockdown: All Nyishi Youth Association appeals to people to cooperate with the state government 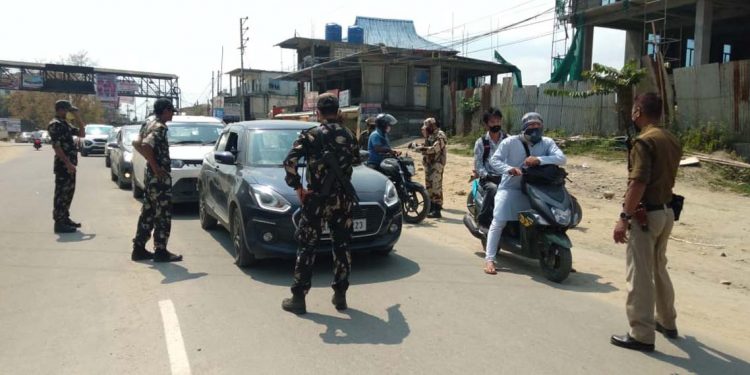 Despite the imposition of a statewide lockdown to combat the spread of coronavirus in the state, a large number of people from Arunachal Pradesh‘s capital city were seen valiantly defying the order on Tuesday.

The state government had on Sunday evening announced that the lockdown would come into effect from 5 pm on Monday and would remain so until March 31.

The step was taken following the extensive spread of the coronavirus around the globe and as a measure for combating its spread in the state.

Several people were, however, seen moving on the roads and driving their vehicles throughout the day in Itanagar and Naharlagun despite the restrictions and police personnel making repeated appeals and asking the citizens to go back to their homes.

The situation was such that Capital superintendent of police Tumme Amo had to come forward and release a video message requesting the public not to defy the lockdown which has been imposed for their well-being.

Amo in his message urged the people to try not to step out of their homes until and unless there is an emergency.

“The police department is trying its best to make sure that the lockdown is adhered to for the greater safety of the people, however, where at one end, 70 per cent of the people have self-quarantined themselves in their homes, the rest are wandering in the roads for no valid reason and despite strict orders being issued by the government,” Amo said.

The SP said though there is no bounded law which states that a person cannot come out of their houses to get essential food items and in cases of emergencies during the lockdown, but it would be better if they remain at their homes unless it is important.

Amo also requested the state government to come out with a specific notice though which the police could know which of the government offices would remain functional during the lockdown as most of the people were making excuses of going to work and coming out in the streets.

The All Nyishi Youth Association (ANYA) has also appealed the people of the state to cooperate with the state government so that the lockdown is maintained.

“It is our duty and responsibility to take practical precautions and measures to protect ourselves, our family members, friends and relatives from the deadly virus,” ANYA general secretary Bengia Tada said in a statement.

“Defying the government’s lockdown order suggests that we are putting ourselves and everyone else at risk due to our carelessness,” Tada said.

The union further said that the state government should provide sufficient medical equipments to the health workers and set up adequate establishments or centers for self-quarantine in the state to contain the spread of COVID-19.

Meanwhile, day one of the statewide lockdown saw most of the shops and business establishments around the state remain closed throughout the day except for a few vegetable markets and medical stores.

The prices of vegetables also witnessed some sudden hike, with most of the vendors claiming that their stock is almost over.

The Ramakrishna Mission Hospital here has announced that it would close it’s Out Patient Department (OPD) services from Thursday until further notice in order to prevent the possible spread of COVID-19.

The casualty and emergency services of the hospital would, however, remain functional as usual.

Meanwhile, countrywide lockdown for 21 days began from midnight on Tuesday.

The 3-week lockdown was announced by Prime Minister Narendra Modi while addressing the nation at 8 pm on Tuesday.

Earlier, ‘Janta Curfew’ was observed across the country on March 22 from 7 am to 9 pm.