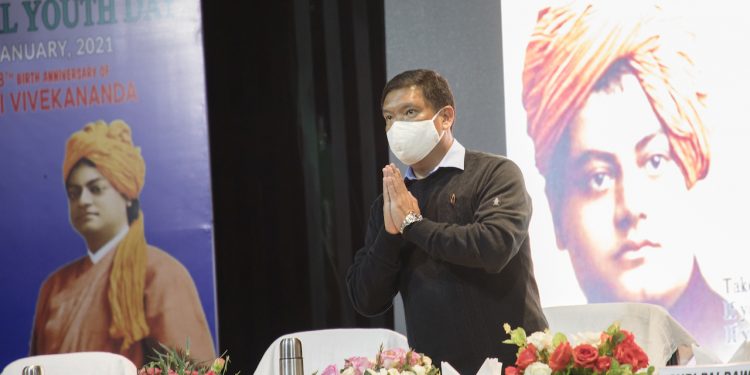 Arunachal Pradesh chief minister Pema Khandu has said that the youth of Arunachal Pradesh have tremendous potential to meaningfully contribute to nation-building as envisioned by Swami Vivekananda.

Swami Vivekananda’s 158th birth anniversary was celebrated as National Youth Day across the country on Tuesday.

Speaking on the occasion Khandu said the youth of today have access to education like never before and therefore are better equipped to shape the future of the state and the country.

“Arunachal Pradesh is unique owing to its culturally diverse communities with about 26 major tribes and more than 100 sub-tribes,” said Khandu.

“The onus is on the educated and conscious youths to foster a pan-Arunachal identity by maintaining peace and communal harmony,” he said.

In earlier days there were very few schools but quality education was provided, while today schools are aplenty but the quality of education has dropped.

He lauded Vivekananda Kendra for venturing into Arunachal and providing quality education, especially in the late 70s through Vivekananda Kendra Vidyalayas, whose students are today in service of the nation in various capacities.

Khandu also emphasized the role of today’s youth, who he believed can be game-changers if they have the will and guts.

“Youths today must have muscles of iron and nerves of steel, as quoted by Swamiji. They must have the guts to stand up against what is wrong. When they start to raise their voices against all things wrong, not only the outlook of the society will change but also keep the government on its toes,” Khandu said.

The chief minister took a veiled swipe at random protests and protestors, who tend to take democracy for a ride in the garb of the fundamental right to protest.

“Such people must know that a majority of the silent population know the truth. But because this majority population remains silent, they always get away with their vested interests,” he said.

Talking about reforms in governance, he admitted many – including some politicians and bureaucrats – may not be comfortable at the beginning but asserted reforms must come.

“To root out corruption and hassle-free delivery of services to the common people, reforms are a must in governance,’ Khandu said.

“At times we have to take tough decisions, which may pinch a few but will be beneficial to our youths,” he explained.

Khandu also raised the issue of drug abuse and termed it dangerous than terrorism.

“Drug abuse can wipe out the future of an entire generation. We are here to help you,” he said.