He also stressed on extensive IEC campaigns to create awareness among the people. 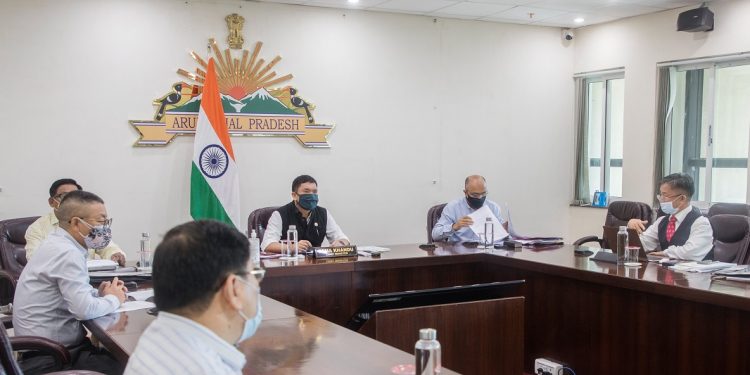 Arunachal Pradesh Chief Minister Pema Khandu on Monday reviewed the state’s preparedness to tackle the south west monsoon in a meeting with the state’s disaster management authority in Itanagar.

The south west monsoon is yet to arrive in its fullest; however, Arunachal Pradesh has already witnessed heavy rains triggering landslides and flash floods across the state.

Briefing the chief minister on the preparedness, disaster management secretary Dani Salu informed that NDRF personnel have been positioned at Bomdila for the west and at Tezu for the eastern parts of the state, while SDRF units have been positioned at the five regional response centres at Dirang, Ziro, Pasighat, Tezu and Khonsa for quick response to any disaster situation.

“Our department is in constant touch with agencies like the central water commissioner, India Meteorological Department, hydro power, water resources, urban development, etc for liaising, coordination and information sharing to put in place precautionary measures in advance,” he said.

Salu revealed that extensive information, education and communication (IEC) campaigns have been launched to create awareness while the department is conducting mock exercises on earthquake and other disasters including flood and fire.

Further the department has trained volunteers on disaster management across the state, whose assistance may be obtained by the respective deputy commissioners in case of emergency.

“These volunteers are also trained to deal with the COVID19 situation; therefore, their services can be an asset to the district administrations,” Salu added.

Chief Minister Khandu advised the department to extensively train more volunteers across the state up to the village level.

Also read: FINER and fight against COVID-19 in Assam

Expressing concern on habitats in and around the state capital vulnerable to landslides and floods, Khandu suggested the disaster management director to survey, map and notify all such vulnerable habitats and facilitate shifting of all such families to safer locations.

He also stressed on extensive IEC campaigns to create awareness among the people.

“Without thinking of any possible disaster, our people tend to build houses and reside in areas which are prone to landslides and floods during the monsoons. We need to make them aware even if it may take time,” he said.

Khandu also expressed grave concern over rampant earth cutting in the state capital and called upon the department to coordinate with the district administration and put a halt to such activities.

He also accepted the suggestion put forth by the department to put in place a real time monitoring system in the state for early warning signals of upcoming disasters to prevent loss of lives and other damages.

He gave a go-ahead to the department to take help from reputed institutes for technologies which could detect soil movement and give out advance warning signals.

The chief minister also reviewed the status of preparedness in terms of medicines, essential commodities, manpower in the districts, fund position of the department, etc.

It was also agreed that a certain percent of the state disaster relief management fund will be used for mitigation purposes only.