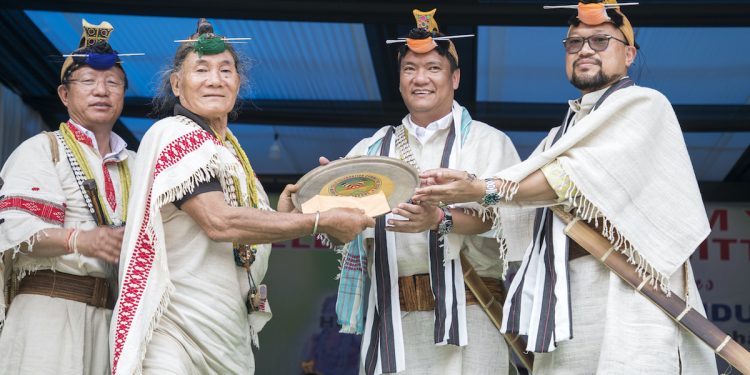 Pema Khandu while attending a function at Pitapool, a small town in Lower Subansiri district, urged the younger generation to continue the tradition and preserve their culture for posterity.

‘Being Human’ is ‘Being Nyishi’.

The message came across crystal clear this Nyokum at Pitapool, home to the first-ever centralised Nyokum Yullow celebrations 53 years ago.

The grandeur and pride of the Nyishis attached to their culture were in full bloom as every ritual was conducted in its original form and men, women and children shunned all barriers to join the celebration.

To add to their joyous celebrations, Arunachal Pradesh chief minister Pema Khandu arrived from Itanagar along with Namsai legislator Chow Zignu Namchoom at the General Ground decorated to the teeth.

Incidentally, the ground was developed and dedicated to the people years ago – besides the Circle Office nearby – by former chief minister late Dorjee Khandu, the present CM’s father.

“No one from outside can help. If Nyishi culture is to be preserved, only the Nyishis can do it,” he said.

Khandu underscored the significance of practicing local dialects, which he pointed is the strongest connection to one’s culture.

He said while it is necessary for today’s generation to go outside for higher and technical education, it is also necessary that they learn and speak in their native languages.

“The state government is committed to preserve and promote indigenous culture through the promotion and teaching of local dialects. I request community-based organisations and intellectuals to come forward and suggest or help us in this endeavour,” he appealed.

While assuring all-out support in development of the region, the Arunachal Pradesh chief minister congratulated the people for having an able leader in Taba Tedir, the local legislator and present education minister.

He though regretted that due to various reasons the lifeline of Lower Subansiri, Kra-Dadii, Kurung Kumey, Kamle and Upper Subansiri districts – the Potin to Pangin stretch of Trans-Arunachal highway is still waiting to see light of day.

Speaking frankly without mincing words, Khandu cautioned those going for ‘illegal’ land compensation and urged those who have already taken huge compensation amounts against non-existent land and property, to return the amount to the government voluntarily.

“I announce here today that the state government is serious on the note and soon the law will take its course. I request those who have received excessive payments for land compensation without having any land or property to return the same before police arrive at their doors,” he cautioned.

Reiterating his non-compromise on corruption, Khandu regretted that few government employees mislead the people, who are actually innocent.

Referring to the recent Staff Selection Board (SSB) fiasco, the chief minister said ‘he was hurt the most’.

“I was in Tawang attending a meeting when I came to know about the incident. I immediately left by road and reached Itanagar late at night. I couldn’t sleep properly,” he revealed.

Khandu said the SSB was constituted to offer a level playing field for educated unemployed youths irrespective of social background.

“How could few employees dare to do corruption in this is beyond my understanding. I reiterate no-one involved will be spared,” he said.

Khandu, meanwhile, felicitated the local priests of the festival and also those who were members of the organising committee of the first ever centralised Nyokum Yullow celebration at Joram in 1967.

Popular yesteryear singers Bengia Hemanta and Bengia Tab retouched their melodies to add flavour to the festival, which continued till late evening.