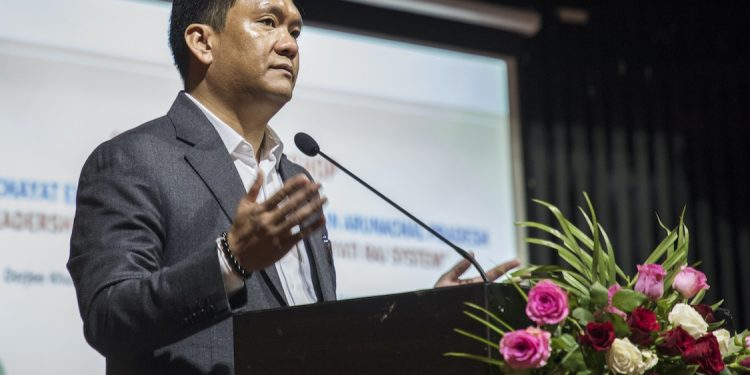 Arunachal Pradesh chief minister Pema Khandu on Tuesday said the long pending elections to the local bodies of the State would be held soon and an all-party legislative meet has been convened for Wednesday that will discuss on whether the same will be fought on a non-party basis.

Khandu, who was addressing the state level workshop on pre-panchayat election awareness campaign at the Dorjee Khandu auditorium of the state Legislative Assembly in Itanagar, said ‘the state election commission is working overtime for the elections to be conducted successfully’.

He urged the officials, who would be directly involved in the election, to equip themselves with the process minutely for its successful conduction.

The chief minister, however, did not give the exact dates of the polls.

The panchayat election, along with the municipal elections of Itanagar and Pasighat, are due in the State since May, 2018.

Addressing the event Khandu said, “As the erstwhile three-tier system of the Panchayati Raj has been changed to a two-tier system, officials conducting its election for the first time need to have detailed knowledge of the system so that they can go back to their respective places of duty and aware the villagers.”

“Elections for the first would be conducted for only gram sabha and zilla parishad. Therefore, it is mandatory that our officials are well equipped with the system and the process,” the chief minister said.

Khandu asserted that the change was long pending and inevitable after Arunachal Pradesh became a full-fledged state in 1987.

He requested the officials to create awareness on the importance of local bodies so that villagers have a clear mindset on whom to elect as their representatives.

He expressed optimism that deserving candidates would become members for a robust Panchayati Raj system and all-round development of rural areas of the state.

“Our vision is clear. We need to have the most deserving persons in our Panchayati Raj system, irrespective of which party he or she belongs to or not,” he revealed.

He said only when eligible and deserving candidates win, real development would start from the ground and democracy in its true sense would prevail.

Regretting that in all these years the government could not devolve all the 29 functions to the Panchayati Raj members as enshrined in the Indian Constitution, Khandu assured that in the coming days these would be devolved.

“Arunachal Pradesh, with its vast resources, has the potential to develop on all fronts even without central or external aids,” he also said.

“We only need to have the will and eligible members in governance. I hope this Panchayati Raj elections would be a new beginning for us in this direction,” he added.