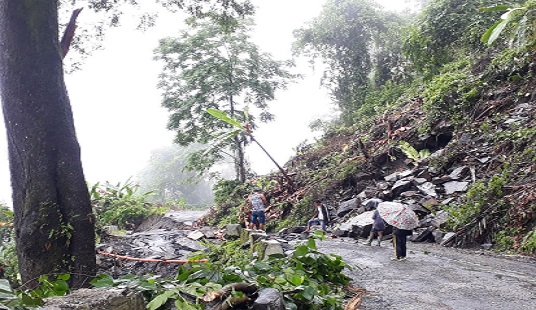 The West Kameng district administration has banned traffic along the stretch of Balipara-Charduar-Tawang (BCT) road till June 24 following fresh landslides in Sessa near Bomdila in the district on Monday morning.

Bomdila, the headquarters of West Kameng district in around 265 kms from here.

The BCT road that shares an international border near Tawang is considered to be the lifeline for the three districts of Arunachal Pradesh viz, East Kameng, West Kameng and Tawang and it was already closed since June 15 for vehicular movement after massive landslides occurred at multiple locations due to incessant rainfall in the district.

The magnitude of the landslides had forced the district administration to issue a prohibitory order calling for the total closure of the BCT road for all vehicular traffic from June 15-17.

However, on reports of massive fresh landslides, especially near Sessa this morning, deputy commissioner DM Dr Sonal Swaroop has ordered for complete shutdown of the road till June 24 citing the present weather and road conditions which could pose threat to the life and safety of the commuters.

The same has been communicated to the deputy commissioners of East Kameng, Tawang and Sonitpur district, Tezpur, Assam.

Further, the CO 14 BRTF has been directed to ensure restoration of the BCT road on utmost priority.

Meanwhile, official sources have confirmed that there is sufficient stock of food grains in the district but it is at present running low on LPG. The lone petrol depot at Bomdila has downed its shutter for the time being but is expecting replenishment of POL items in a day or two.

People intending to travel to West Kameng and Tawang can opt for the Orang-Kalaktang-Shergaon-Rupa-Tenga (OKSRT) road. Though bit lengthy from Mission Chariali Tezpur it is a two lane all weather road.