Kick boxer Jumi Basar from Lepa Rada district in Arunachal Pradesh has been selected to represent India at WAKO World Senior Kickboxing Championship 2019 which is going to be held at Bosnia & Herzegovina from October 19 to 27 next.

Under the guidance of Bulang Marik (president) and Charu Govin (general secretary) of the Kickboxing Association of Arunachal (KAA), Jumi Basar has won gold medal in Light Contact Category (89Kg) at WAKO India Senior Kickboxing Championship 2019 which was held at Rohtak in Haryana recently. 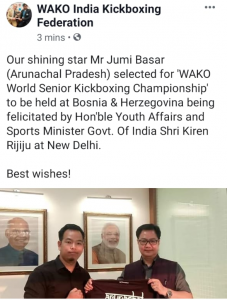 Notably, Basar is the first kick boxer from Arunachal Pradesh who will represent the country in the World Senior Kickboxing Championship.

This young Boxer from the State is seemingly confident of making Arunachal’s and India’s presence felt at the coming international event at Bosnia & Herzegovina.

He is leaving for Mysore in Karnataka to attend a pre- World Championship training camp arranged for the selected players from October 11 to 17 next.

It is being organized by WAKO India National Kickboxing Federation.

Assam: How to cultivate mushroom? Aaranyak shows ways to women in Karbi Anglong