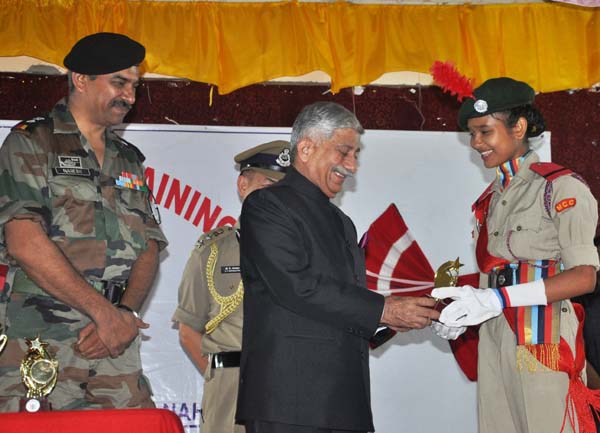 Speaking on the occasion, the Governor exhorted the NCC cadets to personify the motto of National Cadet Corps, which is ‘Unity and Discipline’. He emphasized that they must imbibe leadership quality, sprit of nationalism and ideals of selfless service while developing a strong moral character, comradeship, discipline, secular outlook and spirit of adventure. There is a need for them to build up strong nationalism.

The Governor further stressed that NCC is required to counter the divisive forces as the second line of defence.

The Governor advised the cadets to take to their heart the great command of Field Marshal Philip Chetwode to the youth, enshrined at the Indian Military Academy (IMA), Dehradoon, i.e.,

Sharing his experience as Cadet from 1955 to 1959, the Governor said that the preliminary training in NCC and NCC-C Certificate, which he received, helped him in joining the Indian Army. He advised the cadets to guide, motivate and encourage other youth to be part of NCC the disciplined organization.

The Governor was impressed by the turnout, cultural programme and the Guard of Honour presented to him. Cadet Nipia Kipa of Govt Higher Secondary School, Doimukh was the commander of the Guard of Honour. As a token of appreciation, he gave a cash award for ‘Bara Khana’ to the Cadets and another cash award to Cadet Chimpy Boruah of North Lakhimpur College, Assam for a meritorious girl cadet and ‘Best in Firing’ amongst girl cadets.