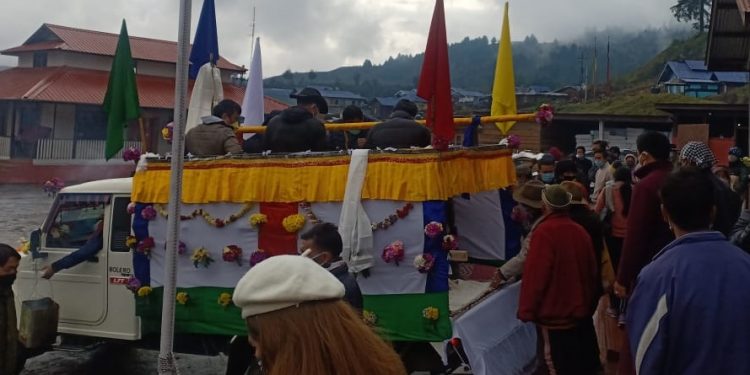 People from all walks of life on Thursday bid a tearful farewell to Late Pasang Wangchuk Sona.

Hundreds of people from all walks of life on Thursday bid a tearful farewell to Late Pasang Wangchuk Sona whose mortal remains were laid to rest with full traditional honours at Singbir village near here.

A veteran politician of the state, Sona, breathed his last after prolonged illness at his hometown Mechuka on April 3.

Family, relatives, friends and well wishers thronged at his Mechuka residence in the morning to pay their last homage to the departed soul before his mortal remains were taken to Singbir village for the last rites.

Born in 1951 at Mechuka in Shi-Yomi district, 69-year-old Sona got elected to the second legislative assembly of Arunachal Pradesh in January 1980 and became its deputy speaker.

During his second stint as MLA in 1990, he held an important post of a deputy chairman of the state planning board and after being elected for third time from the 33rd Mechuka constituency in 1995, he served the state as minister for mines and minerals and food and civil supplies.

Late Sona led the society through various other social posts such as treasurer of All Arunachal Pradesh Buddhist Society, chairman of Mechuka Buddhist Society and Library Committee etc.

Sona, who is also the father of incumbent legislative assembly speaker Pasang D Sona graduated from St Edmund’s College, Shillong at a time when his native place was considered as one of the remotest place without even road communication.

He began his political career as student leader and held the post of the president of Mechuka Student’s Union during 1965-67.

Late Sona is survived by his three sons, one daughter and grandchildren.

Meanwhile, state legislative assembly speaker P D Sona on behalf of his family has expressed his deep gratitude to all the well-wishers, friends and relatives for their support and prayers.

“I thank all for the love they bestowed upon our family during this testing time,” the speaker said.