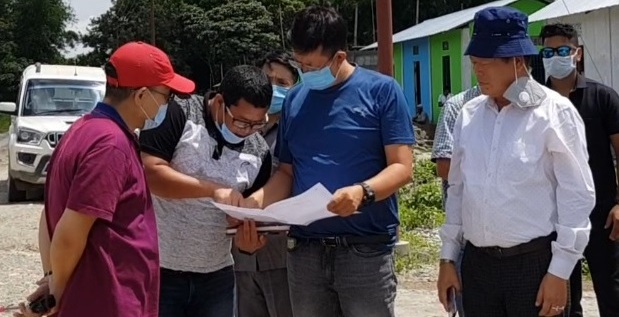 Arunachal Pradesh civil aviation minister Nakap Nalo on Saturday said that the state government is extending all possible support to the Airports Authority of India (AAI) to complete the ambitious Hollongi Greenfield Airport project by 2022.

The minister, in his interaction with reporters following his visit to the project site at Hollongi near Itanagar said, “Though the ongoing construction work was put to a halt for a few months due to the lockdown, the same has now resumed and is in line with the government’s target to complete the project by 2022.”

Chief minister Pema Khandu had earlier this month called upon the AAI to expedite the work on the Hollongi Airport and assured the authority of all cooperation for the work to continue unhindered.

Nalo further informed other construction work such as the four-lane approach road for the airport, water and electricity connection, erection of boundary walls etc have already started.

“The tender process for construction of the airport terminal and runway which fall under the AAI has also been completed,” he said while adding that the government is expecting some major development in the next couple of months.

In regards to the rehabilitation of project-affected people, Nalo informed the entire 156 families have been shifted to a new location.

“There were some issues related to the water supply in the new location and the same shall be fixed in a couple of days,” he said.

Doimukh legislator, Tana Hali Tara, who accompanied the minister during the visit, said all local disputes regarding the land have also been cleared.

“This is a dream project of the state government and we will extend all possible help to make sure that the project is completed within the stipulated timeframe’ Tara said.

Earlier the minister and MLA along with Papum Pare deputy commissioner Pige Ligu, superintendent of police Jimmy Chiram and officials of the AAI visited the rehabilitation center and interacted with the project affected people.

Prime Minister Narendra Modi, during his third visit to the state as Prime Minister in February last year had digitally laid the foundation for the construction of Greenfield Airport.

The airport, which would be built by the AAI over an area of 320 hectares, when completed, will be able to accommodate narrow-body jets like the Airbus A321 in the first phase.

The work for the Greenfield Airport project has been awarded to Dineshchandra R Agrawal Infracon Private Limited, an Ahmadabad-based construction firm following a tender process.