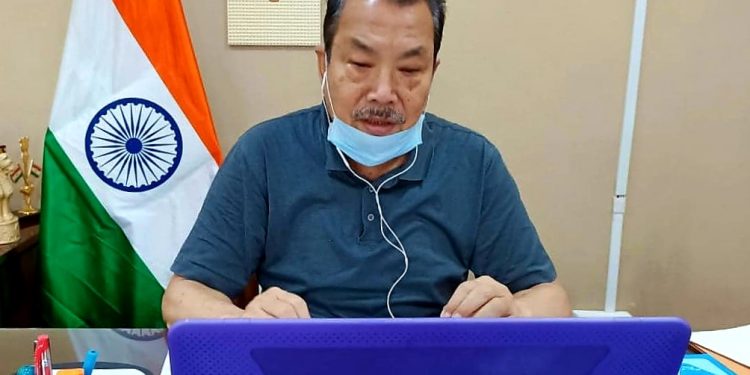 Arunachal Pradesh deputy chief minister Chowna Mein on Tuesday sought the formulation of a ‘Policy for Purchase Preference for products manufactured in Arunachal Pradesh’ in a video conference with the minister and secretary of the Industries department.

Mein said the Centre has provided a clear policy guidance for promoting domestic industries by providing purchase preference for those who manufacture in India.

“On similar lines, we need to provide some preference to the products made in Arunachal Pradesh in government procurement in order to promote investment in manufacturing industries in the state,” he said.

He stated the Arunachal Pradesh Industrial and Investment Policy provides for preference to the registered units or enterprises of the State while purchasing manufactured products needs to be backed by a suitable purchase preference policy which the Industry department has to notify.

“Without such preference it will be difficult to attract investment in manufacturing in Arunachal Pradesh,” he said, adding that the proposed policy will be in line with the Central policy amended on June 4.

He also advised the officers to study the policy provided by other state governments and formulate better preferences in order to lure the manufacturing industries to come to the state.

He requested the department of Industry to initiate the process of formulating the purchase preferences.

Mein advocated the promotion of local products such as organic kiwi wine ‘Naara Aaba’ in order to encourage local entrepreneurs and formulate policies to promote such local brands across the country.

The deputy chief minister also asked the officers to inquire about the palm oil companies that had signed agreements with the state government for setting up of processing industries with a buy-back policy.

He resented the pullout of some palm oil companies from projects to set up processing industries and to buy back the matured seeds produced by the local growers.

“Many progressive farmers in East Siang and Lower Dibang Valley districts have grown oil palm on a large scale expecting the industries,” he said.

Mein, however, exuded hope that the Mega Food Park coming up in Itanagar will cater to the processing and marketing needs of local agricultural products.

He said that the state government will provide all logistic support for approach roads, electricity and water supply to this park.

Industries Minister Tumke Bagra has directed Industries Secretary Hage Tari to process the draft policy on preference purchase for vetting by the Planning, Finance and Law department at the earliest and placing it in the next Cabinet meeting for approval.

He also said that micro, small and medium enterprises and indigenous textile and handicrafts need to be given due importance and considered as priority sectors by the state government in order to promote local entrepreneurs.

Commissioner (Planning & Investment) P S Lokhande, assuring to work in coordination with the department of Industries, said the policy would be finalised within 15 days.

He also assured to simplify and expedite the process of getting clearance through a single window for potential and interested investors by bringing in desired modifications in ‘ease of doing businesses’.