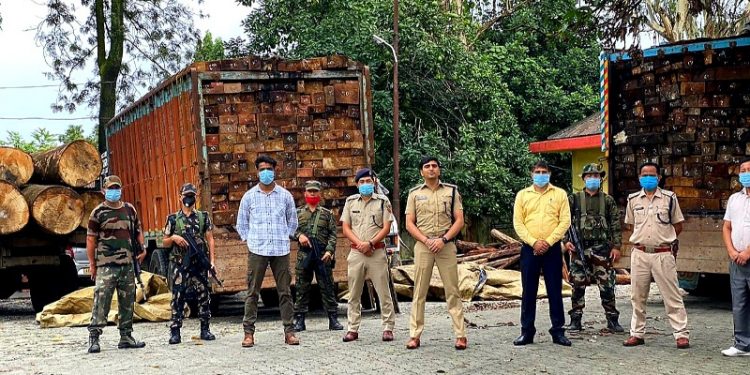 The team not only apprehended the drivers, owner of the saw mill involved in making the TPs and several middlemen but also arrested one Raju Medhi of Dhola, a timber merchant and the kingpin of the operation.

The Roing police also confiscated from Medhi a pistol along with 13 live rounds and cash. His arms license seemed to have been obtained illegally from Pasighat in 2019, police said.

The man confessed to selling timber across the country and beyond illegally from his depot at Dhola in Assam. He revealed the names of some accomplices, one of whom is the brother of an MLA of Arunachal Pradesh.

The Roing police have also been conducting regular raids on clandestine mills and monitoring routes used for smuggling timber from Lower Dibang Valley district to mills in Chowkham.

On July 13, the team had confiscated a truck carrying an expensive variety of wood after chasing it for some time. The driver made the truck collide with the police vehicle and escaped from the spot.

“We have registered three cases in this regard and investigation is on. We have till now arrested 10 people and confiscated five trucks of different sizes with timber of A and B quality,” Sain said.

A preliminary probe made it clear that trees felled in Tezu, Roing and Namsai forest divisions have been transported illegally to saw mills in Chowkham, from where they are loaded onto trucks whose operators are armed with TPs obtained in Pasighat. The timber is delivered to Assam.

Forest officials in Pasighat admitted to issuing the TPs but said the trucks and timber seized are not the same as those they had issued the permits for.

This, police said, pointed to obtaining TPs fraudulently by the mill owner and the transporter.

Sain said the racket has been operating for a few months now.