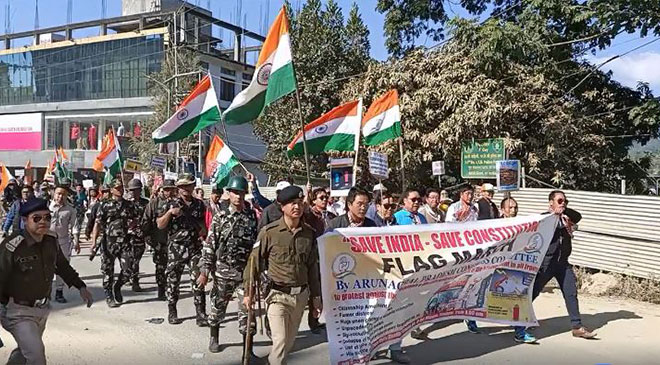 The peaceful protest march started from Rajiv Gandhi Bhawan and ended at Raj Bhavan on Saturday.

Demanding the scrapping of CAA, members of the state Congress party marched with flags shouting slogans against the BJP leaders.

The flag march had been termed as ‘Save India – Save Constitution’ rally by the APCC.

Later, the members of the Congress party, led by former APCC president Takam Sanjoy, also submitted a memoradum to the Governor, Brig (Retd) B D Mishra.

It may be mentioned that protests against CAA is still going strong in various parts of the country even now and had showed no signs of slowing down.

A number of lives had been lost and many people had been injured in police firing in the country wide CAA protests.

The Assamese community living in the capital complex of Arunachal Pradesh had staged a peaceful sit-in protest against the Citizenship (Amendment) Act (CAA) at the IG Park tennis court in Itanagar on Sunday last.

The protesters had vented their anger and frustration at the Centre over the law, saying it would adversely impact the people of Assam and all other northeastern states

They were of the view that Assam is already overburdened with illegal immigrants from Bangladesh and now it cannot accommodate any more of them.