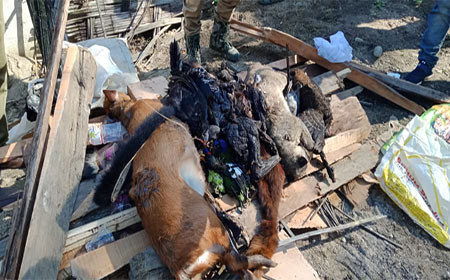 As many as 30 carcasses of wild animals and birds at the forest check gate at Yachuli, under the Yachuli forest range, in Lower Subansiri district of Arunachal Pradesh were seized on Tuesday.

The seizure was made during a surprise check of vehicles, including government vehicles, according to reports.

The vehicles carrying the carcasses were detained, while the seized carcasses were burnt in the presence of principal chief conservator of forests (P&D) Rabindra Kumar, who happened to be passing to the area during his official tour of Lower Subansiri.

Kumar appealed to the people to refrain from and discourage hunting of wild animals and birds.

Meanwhile, PCCF (WL&BD) M S Negi lauded the efforts of the officials concerned towards restricting such activities, while Lower Subansiri DFO Koj Rinya cautioned people against such illegal activities, and said more such checks will be conducted.

The surprise checks were conducted at the direction of the Lower Subansiri DFO, and were executed by Yachuli Range Forest Officer Likha Obi, with assistance from Yazali PS OC T Passar and other officials.