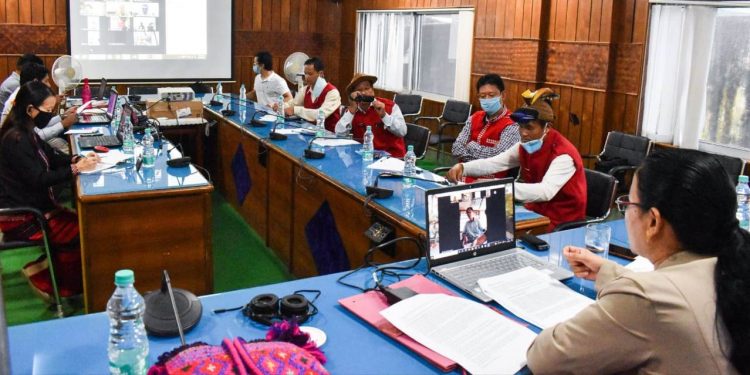 The importance of the role of Gaon Buras and Buris (GBs) in the administration of justice at all levels in Arunachal Pradesh was underscored at an online state consultative meeting on legal literacy for them on Sunday.

The Arunachal Pradesh State Legal Services Authority (APSLSA) organised the meeting in collaboration with the Ministry of Law and Justice under the Access to Justice in North East and Jammu and Kashmir project. GBs from 14 districts participated in the meeting.

The objective of the meeting was to share the initiatives taken by APSLSA for the training of GBs, record best practices and success stories from them on legal empowerment and to understand the gaps in legal literacy.

The meeting began with APSLSA member-secretary Jaweplu Chai highlighting the initiatives undertaken and said that the state authority has conducted training for 484 GBs covering 22 districts.

This was followed by Prashant S. Lokhande, Commissioner of Investment Planning, Agriculture Production and Chairman of APSSB underscoring the roles and responsibilities of the GBs and the traditional village council scenario.

“The GBs play a major role in administration of justice at all levels. Apart from resolving disputes in the community, they help improve the society,” he said, advising them to pay attention to gender equality and minimizing local level corruption.

Lower Subansiri DC Swetika Sachan outlined the limitation of the powers of the GBs while dwelling on legal literacy.

She asked the GBs to strictly follow the regulation as mentioned in the Assam Frontier Regulation (AFR), 1945, to ensure that any judgement they pass on disputes does not get appealed at the DC’s office.

Capital SP Tumme Amo said GBs are like the police in areas where there are no police stations. He requested them to cooperate with the police in maintaining law and order in the community.

He added GBs should practice fair approach when resolving disputes.

APWWS secretary Kani Nada Maling and professor of RGU’s Arunachal Institute of Tribal Studies, Jumyir Basar discussed the legal aspects of the issues and challenges before the GBs.

They advocated against political interference in the appointment of GBs.