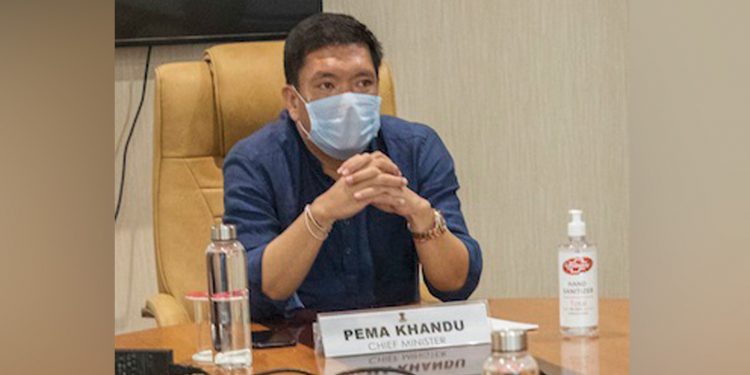 ANYA pointed out that Khandu, his officer in special duty (OSD) Nob Tsering, the MLAs of Mon region, officers and intellectuals had attended the Mon Autonomous Region Demand Committee’s (MARDC) meeting on July 30 in Tawang, where a resolution had been adopted for boycotting the upcoming panchayat election.

“This reflects his (Khandu’s) failure in governing the state,” the ANYA said in a statement on Saturday.

It added that the committee is headed by Lumla MLA Jambey Tashi, his Dirang counterpart Phurpa Tsering and Nob Tsering.

“How can the chief minister and MLAs be a part of the boycott of rural polls? We appeal to Prime Minister Narendra Modi and the top central leaders of the BJP to use their wisdom and see how their leaders are playing divisive politics that may diminish the popularity of BJP in Arunachal Pradesh,” the association said.

The ANYA said when the world has been combating the Covid-19 pandemic, Khandu flouted the guidelines issued by the World Health Organisation, the state’s health department and others for attending the meeting for Mon area autonomy.

It further asked why the chief minister and the others were not sent to a quarantine facility for violating social distancing and other norms during the meeting.

Accusing Khandu of “promoting regionalism and communal politics”, the youth association questioned the need for an autonomous region when the “lion’s share of state and centrally-sponsored schemes” and funds are awarded to Tawang and West Kameng every fiscal.

It also cited the creation of the Department of Karmik and Adhyatmik Affairs with focus on those areas.

A chief minister “openly supporting his own community and region” for an autonomous entity could trigger similar demands among every other community and in every district of the state, the ANYA warned.

The Adi Students’ Union (AdiSU) has also expressed concerns over the demand made by the MARDC and termed it as “an act of dividing the state”.

It also termed the resolution passed in this regard in the state assembly in 2004 as one of “the historical blunders made by the political representatives of the state.”

“It is high time that the state government recalls the bill for the greater good of the state. Though the 6th Schedule of the Indian constitution provides constitutional arrangements for administration of tribal areas through Autonomous District Council, the implementation of the same would open the floodgate for more such blunders,” the union said.

The AdiSU said Arunachal Pradesh being a tribal state has already been facilitated with various constitutional safeguards which keep its traditions and cultures intact.

If the demand is based on ethnicity, then all the tribes in the state are ethnic in nature. If the government plans to go ahead with the demands, then the AdiSU strongly demands a Siang Autonomous District Council (SADC) also be accorded within the same arrangements or your government, it said.