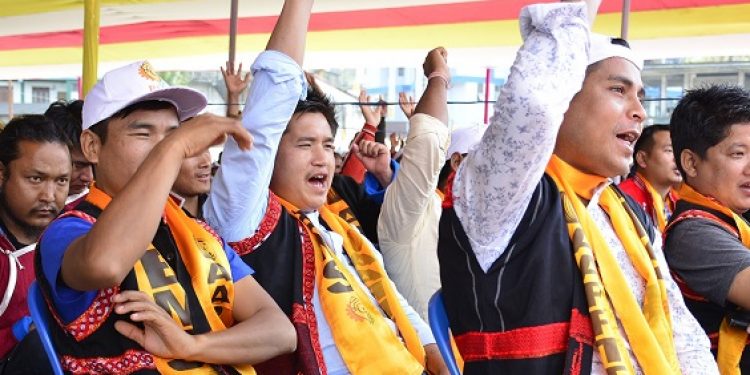 A view of the 3rd interaction-cum-awareness programme under BMS held at Itanagar. Image credit - Northeast Now

The All Arunachal Pradesh Public Transport Federation (AAPPTF) in a two-point memorandum submitted to Chief Minister Pema Khandu on Monday urged him to create the Arunachal Pradesh Motor Transport Worker’s Welfare Board and construct proper parking lots in the Capital Complex.

The memorandum was submitted by Federation president Dobing Sonam on the sidelines of the 3rd interaction-cum-awareness programme under BMS which was organized by AAPPTF at Nyokum Lapang ground in Itanagar.

Bharatiya Mazdoor Sangh (BMS) All India secretary, Rai Bihari Sharma and organizing secretary, North East in-charge, Sunil Kirwai, appealed Khandu to look into to the memorandum, not as a demand of the federation but as their right.

“To ask for creation of a welfare board to look into the problems of the transport workers and parking lot is the right of the workers and the same should be arranged for them,” said Sharma while urging Khandu to take step and become the first State in the country to create a Motor Transport Worker’s Welfare Board.

For the welfare of the transport workers, the chief minister assured that thorough analyses and study about the operations of the workers boards in other states will be carried out to constitute a similar board in the state.

He said AAPPTF and BMS will be made part of such study group for the creation of the board.

On demand for parking space in the state capital region, Khandu informed that the state government has sanctioned two such projects near civil secretariat and Ganga market each worth Rs 15 crore in the previous year.

If the need for more parking project is required, Khandu assured to have discussion with the federation to have it opened in Naharlagun and other areas of the capital region.