He advised the villagers, government officials and armed forces to motivate and prepare local youth for recruitment in the armed forces. Home grown soldiers are the best soldiers for the defence of the national integrity, he added.

As a token of appreciation of their alertness and encouragement, he presented a cash award for a ‘Bara Khana’.

Mishra , who is on a four day district tour, addressed a public meeting at Anini, District headquarters of Dibang Valley District  called upon the people to actively participate in the developmental process.

Responding to public requests, the Governor assured to take up the issue of basic requirements like petrol depot, connectivity and communication, with the concerned ministry. 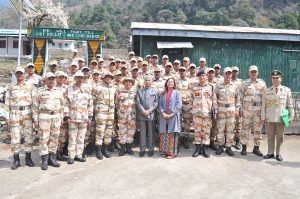 The Governor advised the officials to ensure transparency and accountability, and follow up all projects.

Approximately 35 state and central government programmes and projects are in different phases of implementation.

Expressing surprise and pain about the large number of suicide cases in the district, the Governor assured to take up with the concerned authority to send a psychiatrist to the District Hospital.

The Governor said that 1962 should not be repeated and for which home grown soldiers are needed.  He called upon the goan burahs, PRI members, government officials and the public leaders to ready their youth for recruitment in the armed forces.

Expressing his concern about drug addiction, the Governor said that addiction is due to neglect from guardians towards their wards and peer group. People must address it at family and peer group level.

The Governor who arrived in the afternoon, visited the famed Bhismaknagar,30 kms from Roing which is associated with the legend of Lord Krishna and Rukmini, the Idu Mishmi princess. Acknowledging the historic importance and tourism value of the archaeological site, the Governor assured to take up with Union Tourism Ministry for its promotion and preservation.

Reiterating his concern on female literacy, the Governor said that as the district is led by a lady officer, the female literacy rate must improve. He also stressed that no child should be deprived of opportunities for education.

Appreciating the quantum jump in the number of tourists visiting the district, the Governor said that the three main concerns of a tourist are security, cleanliness and healthcare facilities in case of emergency. These matters must be taken care of to ensure steady inflow of tourists.

The Governor said unless the government officials promote and encourage entrepreneurship and self-employment, unemployment will continue to exist. He categorically said that they must reach out to the youth and facilitate them in availing loans and schemes under Central and State Governments.