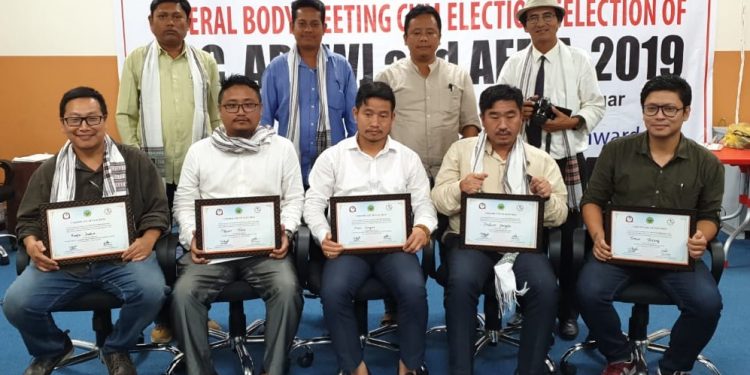 Continuing his stint as the APC president after taking over the reins midway in November last year, Dodum Yangfo expressed his gratitude and assured to continue working for the welfare of the state media with renewed zeal.

“We will ensure that the press club carries forward the work it has done in the past and work towards raising the standard of journalism through workshops and seminars,” Yangfo said.

Into his second stint as APUWJ president, Amar Sangno listed some of the milestones achieved during the last three years under his presidency, including becoming an affiliate of the Indian Journalists Union, registering the union under the Trade Unions Act, and securing pension for retired journalists.

Sangno also pointed at several challenges in the road ahead including the mushrooming of digital media outlets that are opening up with vested interests.

AEDMA president Migom Toko thanked the fraternity for reposing him with the responsibility to work for the growth of the electronic and digital media.

This year’s election was a marked departure from previous occasions in that the elections for all three media bodies were held simultaneously and the usual method of selecting the executive members made way for elections to the posts.

The elections, conducted by the internal election commission led by chief election commissioner Taba Ajum, and Tagu Ningee as returning officer with senior journalists Taro Chatung and Ranjit Sinha acting as observers, were held only for the posts of the media bodies’ presidents and general secretaries.

The executive committees of the organizations will be selected and appointed at a later date.

Meanwhile, the Arunachal Pradesh Publishers and Broadcaster Guild has extended its congratulations to the new team and wished for its success to lead to the growth of the media in the state.