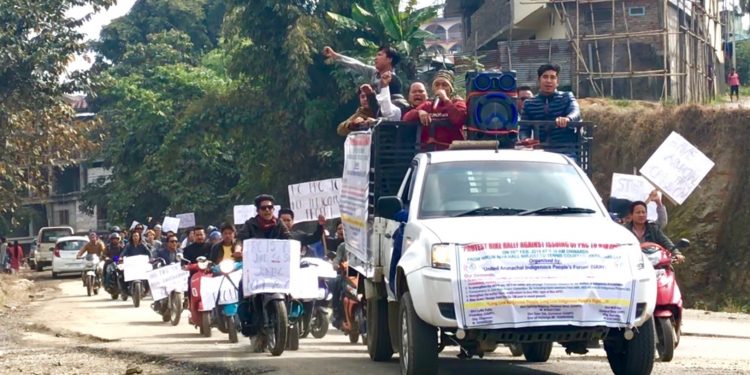 Reiterating its demand for withdrawal of statements given by the chief minister and his deputy to grant permanent resident certificates (PRC) to non-APST communities settled in the Lekang circle of Namsai district, the United Arunachal Indigenous People’s Forum (UAIPF) on Sunday took out a mass protest rally from Nirjuli to the Indira Gandhi Park in Itanagar, the capital city of Arunachal Pradesh.

Chief Minister Pema Khandu, while addressing a public meeting at Vijaynagar in Changlang on December 14 last year, had announced that his government was looking into the odds of PRCs to six non-Arunachal Pradesh Scheduled Tribe (APST) communities living in Namsai and Changlang districts and to the Gorkhas living in Vijaynagar.

He, however, had said the interests of the indigenous population would be taken into consideration and cut-off dates would be set to qualify for permanent resident certificates.

Deputy Chief Minister Chowna Mein had in the same month said in Assam that granting PRCs to the non-APSTs would be a New Year gift for them.

After drawing flaks from various quarters, the State Government had later clarified that it was in no hurry to grant the certificates and it would examine the matter only after receiving the final report from the joint high power committee (JHPC) constituted to look into the matter and later take it to the Cabinet for a decision.

The JPHC sat for one of its meetings on Saturday.

Speaking to media persons, UAIPF president Laffe Paffa said, “We have been told that besides the Papum Pare District Students Union, no other organization or individual who participated in the JHPC meeting on Saturday raised their voice against the granting of PRCs to the non-APST and the government is considering to grant the same. If that happens we will not shy away from starting a vigorous democratic movement.”

Questioning the stand of the JHPC and its members, Paffa further said the committee should work in the greater interests of the indigenous people and present a transparent report.

He also said that Khandu, Mein and former minister Bida Taku should stop playing with the sentiments of the indigenous people.

Besides demanding Khandu and Mein to recall the promise they made to non-APSTs living in Lekang and other places, the UAIPF also demanded that Mein should resign from his post on moral grounds for the ‘irresponsible announcement’ he has made.

Strengthening of the Bengal Eastern Frontier Regulation of 1873 and earlier notifications to ban PRC, more transparency in the JHPC by including more members from other community based organizations etc are the other demands of the UAIPF.

The forum threatened the state government of non-cooperation, social boycott and other forms of democratic agitation if it does not honour the sentiments of its people.

Representatives from a number of communities that are not recognized as Scheduled Tribes (STs) in the State have been demanding that they should be provided PRC as they have been living in the State for decades.