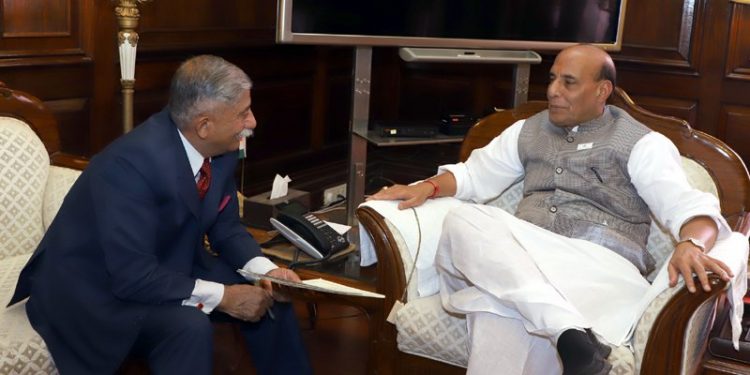 Arunachal Pradesh Governor B D Mishra on Thursday met Rajnath Singh in New Delhi and emphasized on strengthening the security apparatus in the disturbed districts of the State.

The Governor, who is on an official tour to the national capital, also briefed Singh on the law and order situation in the State, and on recent incidents.

Discussions on security and other vital issues pertaining to Arunachal Pradesh were also held.

The union home minister assured to address the issues at the earliest.

Seated among the leaders of BIMSTEC countries, including Bangladesh, Myanmar, Sri Lanka, Thailand, Nepal and Bhutan, heads of the states from Kyrgyzstan and Mauritius, ambassadors and diplomats, the Governor witnessed the swearing in of the Prime Minister and the Union Cabinet.

He congratulated Prime Minister Modi, and conveyed the goodwill of the people of Arunachal Pradesh to him.

This was stated in a press release issued from Raj Bhavan in Itanagar.